Dave S and newcomer Helen met (more by chance and tentative query than planning and design!) at Manchester Piccadilly as the 09:18 train was still waiting to leave for Glossop, and later caught up with Dave Wylie and Al in the entrance hall of Glossop train station.  A walk along Glossop sidestreets and footpaths past Manor Park led to the second designated meeting point at the end of Shepley Street in Old Glossop.  It appeared that no-one else was joining us here and we were just preparing to set off again when a car drew up, one of whose occupants (Lisa) was in search of a ‘guy with a moustache’ leading a guided tour of Bleaklow aircraft wrecks.  We told her that we weren’t the guided tour (and the leader sadly lacked a moustache), but our planned route would indeed take us past one of the most significant crash sites and if she wanted to join us she would be very welcome!  It seemed unlikely that she would meet up with the guided tour at this stage so after some discussion and hasty arrangements Lisa gamely decided to join us and we set off from Shepley Street along the start of the Doctor’s Gate path at about 10:30.  At this stage conditions up high looked misty and cloudy.

We stayed on the Doctor’s Gate path for just a short distance past Mossy Lea Farm, and then veered off left up the track leading in the direction of Shelf Benches quarry, although we shortly left the track itself to follow the ridge above the quarry.  Four of us took a short break for elevenses on the ridge, to find that Al had taken a more direct route up on to Shelf Moor, where we later found him waiting for us.  By this time the mist and cloud had cleared up, and although conditions were overcast, cold and windy, it stayed dry throughout the rest of the day.  We continued round the edge of the plateau past the Lower Shelf Stones and on to the Higher Shelf Stones, where we stopped for an early lunch at the trig point.

After lunch, we walked just a couple of minutes to the nearby site of the USAF Boeing B-29 Superfortress photographic reconnaissance aircraft ‘Overexposed’ which crashed in 1948 with the loss of all on board; much of the wreckage remains as a sobering memorial from the early Cold War period.  We then crossed the Pennine Way and continued over trackless heather heading roughly NE over Westend Head and finally to our turning point at the Grinah Stones.  On our way we spotted quite a number of mountain hares with white winter colouring bounding off into the distance.

From the Grinah Stones we then headed back westwards following a line of stakes to the prominent cairn and stake at Bleaklow Head, past the Wain Stones, and down over Shelf Moss towards the top of Yellowslacks Brook.  By this time a few sunny spells were making an appearance, despite the day remaining cold and windy.  Keeping to the right above Yellowslacks Brook, we followed the path along the edge of the outlying arm of the plateau above Yellow Slacks and down Lightside back to the start of the Doctor’s Gate path.  Lisa’s sister came to pick her up as we reached Shepley Street around 4.30 p.m. (hope you enjoyed the day out Lisa, even if it wasn’t quite what you had planned!), and we reached Glossop train station around 5 p.m., just in time for Helen to catch the 17:08 back to Manchester (hopefully also after a pleasant day out!).  Dave Wylie also left for home, while Al and Dave S went to meet Trish (who had cycled over via Broadbottom after a course in Hyde) and had a pleasant meal and couple of drinks at the Globe before heading home a little later in the evening.  (In Dave’s case, this also allowed football congestion to disperse on the south Manchester tram system following a late Sunday match at Old Trafford – I believe Man Utd beat Spurs 3-0 if you’re interested!).

Total distance was about 13 miles for the full circuit starting from Glossop train station and back, or about 11 miles for the shorter version from Shepley Street in Old Glossop.

This is a circular walk (involving a traditional section of Bleaklow bog trot) from Glossop – for the environmentally conscious or (like the meet leader) the currently car-less there is the option of train travel to and from the meet!

Train option: Take the 09:18 train from Manchester Piccadilly or subsequent stations, arriving at Glossop 09:48 (ultimate destination of train is Hadfield). Start walk from train station at 10:00.

Car option 1: Park in central Glossop (one possibility is on High Street West near The Globe pub, making sure to avoid any time-restricted sections) and walk to the nearby train station (Norfolk St/Howard St) for a 10:00 start.

Car option 2: Park near the Firth Rixson factory at the end of Shepley Street in Old Glossop, by the start of the Doctor’s Gate path. Grid reference SK045948, or factory postcode SK13 7SA. The easiest way to find this is to follow the A57 east out of central Glossop towards the Snake Pass; then shortly after crossing a small roundabout towards the outskirts of Glossop, take a left turn down Manor Park Road (signposted to Old Glossop) immediately before the Commercial Inn. After about half a mile (just before the Queens Arms) you will find the turning into Shepley Street on your right; continue to the factory at the end of this road and park on the right next to the stream (taking care to leave the turning area free, just in case any lorries need to use it on a Sunday). Wait here for the walk to pass through around 10:20-10:25!

Route: From Glossop train station, walk through Manor Park and Old Glossop then along Shepley Street (possibly meeting others here). Start along Doctor’s Gate but a short distance after Mossy Lea Farm turn left and follow a fell runners’ track up onto Shelf Moor and past the Lower and Higher Shelf Stones. Head east, crossing the Pennine Way at Hern Clough, and continue past Grains in the Water and the top of Alport Dale; then roughly north-east to the Grinah Stones; then back west across Bleaklow (most likely past Bleaklow Head), over Yellow Slacks and down Shittern Clough back to Shepley Street and (if desired) Glossop train station. (Sunday trains from Glossop run to Manchester Piccadilly at 8 and 38 minutes past the hour throughout the day until 20:38, with a final train at 21:38 for anyone delayed on the moors or in the pub). 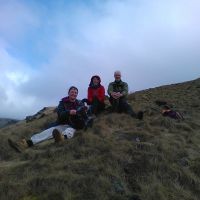 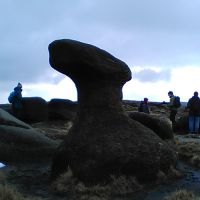 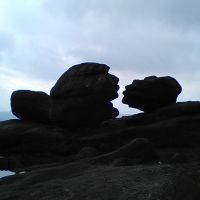