The group promptly set off at 9:45 (it was a bit chilly) and quickly split into two, Alan had emailed me earlier in the week that he and Pete would do a shorter walk.

The route* passed through the woods of Maeshafn and past Kingswood Colomendy and on to Loggerheads Country Park but not quite the route I’d mapped out. We then followed the River Alyn as far as the Cilcain Road and here we were joined by ‘dog’ who was lucky not to have got run over twice. A mile or so further on, ‘dog’ was still with us, being able to squeeze through small holes in the fence, but we lost him in Cilcain when he nearly got run over again.

Now in more open terrain we then headed towards Moel Arthur car park and a half hour lunch break. Trish's chocolate tiffin went down a treat. From here on, we followed Offa’s Dyke south and to the highest point of the walk, Moel Famau. We had excellent views from the remains of the Jubilee Tower. To the west, we could see the snow covered mountains of Snowdonia. To the north, a sea of turbines. To the east, Liverpool/Chester and the brown hills of the Pennines beyond. And to the south, the hills of central Wales.

The final section was over Moel Fenlli via a steep path, which probably was not a path and back to the cars for around quarter past four, a round trip of about 15 miles. Alan and Pete were still out as their cars were in the layby.

Robyn had to head off home while the three of us went to the Druid Inn for a well-deserved drink, Alan and Pete joining us some 20min later. They had had a more leisurely walk, which included the Café Florence at Loggerheads.

A big thanks to all who came out on this meet.

PLEASE NOTE: The start point/car park has changed from that stated in the newsletter.

Meeting point: the A494 between Ruthin and Mold, Grid ref: SJ 187 598 (Parking as for Pot Hole Quarry) just south of Llanferres.

On Offa is a walk of around 12 – 15 miles on good paths and is not difficult. The route is circular but a linear route is possible if I leave my car at Bodfari. For the latter option I need a volunteer with a car to bring me to the start of the walk. 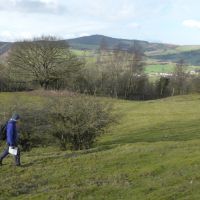 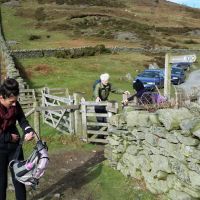 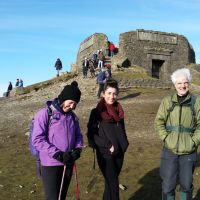