Jared made an early start to the Meet, getting a day’s climbing in on Friday with his friend Luke and others.  In particular he led Elegy E2 5b, followed by Luke - then on a very tight rope by Andy S, our Hon President.

The experience must have prompted an attack of agoraphobia in Andy, because he then set off to do Sifta’s Quid.  Fortunately he recovered before he got irretrievably stuck in the vertical tunnel, and he went off to do Corner Cracks and Right Route, a nice pair of VD’s, with Gowry and Duncan.

Dave Wylie & Roger opened up the amazing Hut and were soon followed by the other ten ‘residents’.

First action was to evict three sheep from the grounds.   Much leaping around the boulders of the ‘garden’ by Gareth, Lucie, Jared and Roger, and an impressive scream from Gowry – a scream so effective that two of the sheep left by jumping the wall rather than going through the gate she was holding open.

Second action was to photograph the framed letter in the lounge, from the Lord of the Manor, giving our Hon Sec’s great aunt permission to climb at the Roaches in 1932 – for just one day.

Back from the pub, about 9.15 pm Andy S, James and Stuart geared up, mounted head torches and went for a night ascent of Pedestal Route.  Somehow, in the dark, they forgot about the notorious rope-trap on the second pitch, so it was well after 11 when they came back – but they had clearly enjoyed themselves.

Saturday dawned cold but bright and dry.   Porridge was cooked and toast toasted in the unique bare-rock walled kitchen.  Gareth stood in danger of violent expulsion from the KMC after admitting to accidentally eating the President’s yoghurt.

Before long our ‘day visitors’ started to arrive – the big picnic tables on the patio were to prove very handy.

Dave Wylie and Lucie made an early start on the Roaches V Diff Challenge – more about that later.

Andy S and James made early ascent of Jelly Roll VS 4b in two pitches, then we were joined by Clay.  James led Jeffcoats Buttress HS 5a, and Andy led the very bold Bachelors Buttress HVS 4c.

Clay and Andy S then teamed up for the rest of the day climbing Via Dolorosa VS 4c in two pitches, Clay leading Kestrel Crack VS 4b, Andy Pebbledash HVS 5a, then they finished with super-classic ‘Top 50’ Valkyrie VS 4c.

Andy’s day finished after dinner with a dusk to dark ascent of Fledglings climb with Duncan.

Stuart’s Saturday started by getting repulsed by Sifta’s Quid, both inside and outside, but  Roster VD proved more amenable despite the poor protection.  Fern Crack S 4b with its athletic start yielded to a bold approach, and then Yong HVD 4a completed Stuart’s daytime climbing….

Richard led Gowry up Corner Cracks and Prow Cracks before she went off to boulder then take a run:  then he teamed up with Dave S for 5 more routes.

Dave S comments:  In support of previous comments about disparate grading in various guidebooks, or possibly further proving the point about the wimpishness of modern climbers  - Dave's BMC 'Staffordshire Gritstone' guide from 1989 suggested that Left-hand Route, Beckermet Slab and Easy Gully Wall would all be nice straightforward routes at VD. All three proved surprisingly tricky for the grade, so it was gratifying to see that they have all been upgraded as indicated on UKC!

After dropping in with the Vdiff Challenge team for a few routes, Duncan followed George up Captain Lethargy HVD and then made his second ever lead – Prow Cracks VD, followed by George and Roger.

With malicious intent I’m sure, James took Ding and Gowry up Pebbledash, HVS 5a.   Then made up for it by taking them up Kestrel Crack VS 4b to shouted ‘encouragement’ from the patio of the Hut.

It was a special day for Dan as he succeeded on Hawkwind (E1 5b) which had been his nemesis since 2005, and the classic boulder, The Staffordshire Flyer.   He celebrated by bivvying for the night on the Hut roof, to be disturbed by the intermittent rock music from down in the valley and then a lively Dawn Chorus.

Ye Olde Rock Inn, just a mile away, proved to be a good place for an evening meal, despite being so busy the only available seats were outside – no hardship on this lovely dry evening.  For many of us, such a welcome change from Tremadog weather!

Roaches, that are graded "V-Diff" in the 2004 BMC definitive

guidebook.  Nine routes in total on the Upper and Lower

tiers, not including those which are just variants of other more

significant ones. It is noteworthy that many of the routes are graded

up all but one route, and they completed the Challenge:-

[Severe, 4a, according to Rockfax. Roger dropped in as third man, and reckons it certainly is 4a – he went flying off the poorly-protected crux move, and was admirably fielded by Dave.  A bold lead.]

[Not so easy, Duncan Zerafa followed up third]

[Severe, 4b, on the UKClimbing Web Site! Lucie backed off

seconding, so Duncan took over].

[Very easy, with Jo Cowley joining to come up third];

It turned out to be an amazing variety (and difficulty!) of routes, given that they were all at the same crag and, allegedly, the same grade...

Sunday started at 6.30 for our President.  Dear me!  The rest of us turned over and went back to sleep.   But mornings aren’t kind to Andy – following the Saturday disaster of having his yoghurt whipped from the fridge, this morning his watch dropped from the belay at the top of Black Velvet.  Fortunately it lodged in the crack a few feet from the top, to be collected by Dan as he seconded.

Jared made a good start to the day, leading Pebbledash HVS 5a – and later in the day on-sighted Commander Energy E2 5c and Pincer VS 5a.  Plus much bouldering.

Stuart followed James up the notoriously poorly-protected Central Route, VS 4b, and claims the gear is actually too bad where it counts, if you've got the right rack.   He then lead Damascus Crack HS 4b – one of Roger’s favourites here – but struggled to second Pincer VS 5a, simply running out of steam after the 5a bit

Andy S and James made a quick trip over to Skyline where Andy was repulsed by the classic three-star Safety Net E1 5b.   James took over to lead his first E1 on grit,:  well done that man – see photos on the KMC website.  Where does he get the strength from?  Then to make the walk worthwhile Andy led Black Pig VS 4c.

Richard must have enjoyed Inverted Staircase, because after lunch he took Ding up it.

Hamish led the iconic and spectacular Sloth  HVS 5a among other routes.

Then an easy variation (following the line of least resistance at about D/VD) up Heather Slab (Dave's lead), and Maud's Garden (HVD 3c - Andy's lead).

Dave then led Damascus Crack HS 4b (one of my favourites!)  with Gary and Duncan following.

Back near the Hut Jared led the spectacular Commander Energy E2 5c, to be followed by Andy S.

Duncan, warmed up after his cold start with Jared, lead up Prow Corner (VD) with Gary Thornhill and then a second with Gary up Prow Corner Twin Cracks (HVD). Then a quick top rope up Damascus Crack (HS) with Stuart H  and Dave S.   Then finished the weekend by leading Gary up Maud's Garden VD “which really is a cracking good climb. “

Andy S decided to do a gentle VD to finish (Raven Rock Gully) but actually went up the left hand by mistake which was the very stiff VS 4b Raven Rock Gully Left Hand, and shredded his hands so badly he had to stop climbing!

With 21 pitches under his belt across the 3 days, mostly VS and above, President Andy really has to take the prize for the most committed climber of the weekend, but Dave W and Lucie showed what good team-work can achieve.

And we all enjoyed ourselves.

This Meet Report is a joint effort by five of us, with extra errors added by Roger.

You'll be welcome at the meet Saturday or Sunday or both, whether you're staying out there or just driving over for the day.

If you get to the Hut and there's no one there, look on the picnic table and elsewhere for a note saying where some of us are.

The Hut's fully booked, but there is a bunkhouse within a mile, camping nearer still, and even bivi spots....

This is your chance to sample multi-pitch grit routes – real classics like Valkyrie, Black & Tans, The Sloth – and fun stuff like Right Route and Inverted Staircase.

Most of course is single-pitch:  Moderates, all the way thro to serious challenges like Caesarean on Hen Cloud.

Yes, on Hen Cloud there are even a few off-widths to practise on ready for Yosemite.

400+ routes, all within a few minutes walk of the Hut.

A café just half a mile away, a decent pub one mile.

Lots of info about the Hut at www.donwhillanshut.co.uk 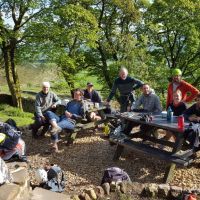 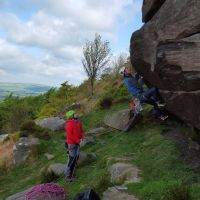 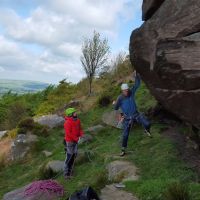 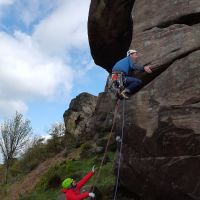 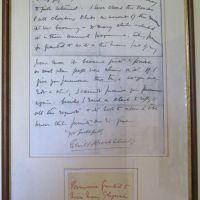 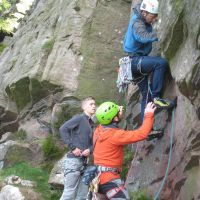 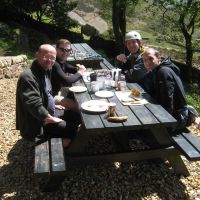 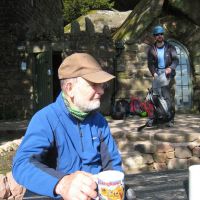 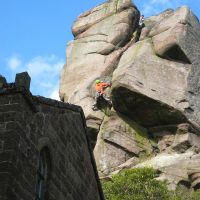 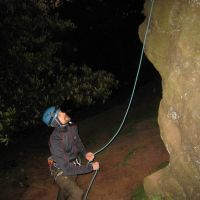 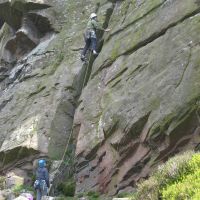 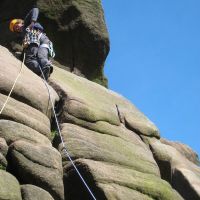 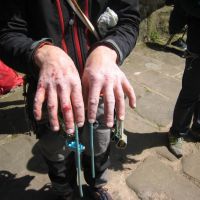 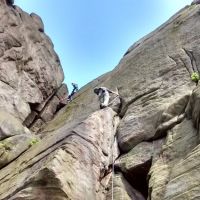 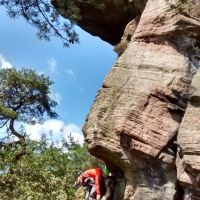 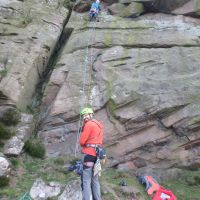 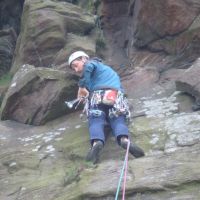 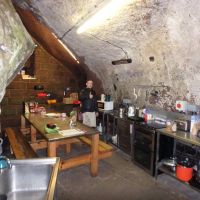 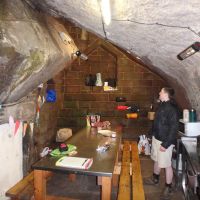