22 members and guests attended over the duration of a very sociable weekend of brilliant weather.

John and Fiona were first to arrive on Thursday evening and had a day out in the excellent weather on First Pinnacle Rib on Tryfan East Face, moving together on the whole route. Many other folks arrived Friday evening.

Al and Trish were first away for the early (8.05) bus to Capel Curig in order to complete the Glyders traverse back to Ty Powdwr. The approx 22km route takes in Y Foel Goch, Glyder Fach, Glyder Fawr, Y Garn, Foel Goch and Elidir Fawr with around 1500m of ascent/descent. FRCC Guests Julzan and Trish walked in to Craig Yr Asfa for the ever popular Amphitheatre Buttress (V. Diff) and as might have been expected on a bank holiday weekend they had hordes ahead including a guide with clients on three separate ropes!!

Andy, Jo, Lucie, Jim, Philippa, and Joe walked to Llanberis then up Moel Elio and back to Llanberis for the inevitable cake and coffee where they were joined by Gareth, Margeret and Callum. Meanwhile, in the Ogwen valley, Dave and Caro had an enjoyable scramble above the Milestone on Tryfan West Face to the summit followed by swimming in Llyn Padarn.

At 5.30pm the BQ coals were lit and eventually Fiona and John’s big barrel BBQ produced some superb heat. Shared salads and other dishes were laid out in the warm evening sunshine. The beer was quaffed, the wine was sipped, chicken tikka tasted, sausages nibbled and burgers hungrily consumed ....and all the while the assembled throng wondered if Fiona and John would make it back for some grub from their own BBQ!!  They had left the hut at 8 am for an attempt on The Gambit Climb; a five-pitch, ninety metre severe on Clogwyn Y Ddysgl, adjacent to the famous Diff of ‘The Parsons Nose’. After spending time looking for parking in the pass (no spaces on a bank holiday by 08.15am) they drove back to the Nant Peris park and ride to claim one of the final spots. A long walk-in and up ensued.....‘’we are not as fit as fit as we thought we were’’ stated Fiona on arrival back at TP – one of the multitudes of reasons eventually given for the unfeasibly long time they had spent out!  They arrived at the foot of their route at 11 am...just as another party of three were starting it. Back at Ty Powdwr, we received a text at 18.40 – ‘’Don’t wait, we’ll be late. Just topped out!’’ They eventually arrived back at the hut at 10 pm but the coals were long since cold.

James and Gareth had chosen a route high in Cyrn Las on the cliff of Diffys Ddu, home of the infamous Main Wall. To the right of this classic Hard Severe is a 3 star 115 metre E1 5b called ‘The Grooves’, described in the CC guidebook as ‘’One of the best mountaineering routes at this standard in Britain’’. The style with which the two fine KMC mountaineers ascended the route (clean and on-sight) is not in doubt or dispute, however they have been severely marked down in style points in respect of purity of approach – instead of walking from Ty Powdwr, they drove to Nant Peris Park n Ride then took a taxi (!) to the Cromlech Boulders!

A team of seven drove to Blaenau Ffestiniog and the Moelwyns for some routes on Clogwyn Yr Oen, one of the most popular crags in that area, but that thankfully proved to be quiet on what was an exceptionally busy bank holiday in Snowdonia. An hour’s drive plus an easy 20-minute walk up the reservoir road led to the base of the crag where we split into three teams. Duncan, Fiona, and John tackled Bent (Severe 4a) in four pitches as per the guidebook with Duncan leading all of them on what was his first proper multi-pitch mountain route. A good effort. Meanwhile, team Wylie (Dave and Caro), enjoyed Chic (V. Diff) then Kirkus’s Climb (V. Diff).

Andy and Jim had a productive day on the two star classic Kirkus’s climb direct (Severe 4a) – the guidebook has it as four pitches but it is doable in two with some judicious use of long extenders and double ropes. They moved swiftly on to Pinky (VS 4c). An excellent and varied climb on immaculate pocketed rock on P1 and a superb, gear swallowing jamming crack on P2. Only marred very slightly by the 10m walk across a steep heathery ledge between the pitches, but the climbing is just top class.

We changed teams for the afternoon’s final session with John and Fiona also climbing Kirkus (V. Diff). Andy (P1+2) Jim (P3) and Duncan (P4) swung leads on Slack (Severe 4a) another excellent route on lovely rock with a superbly exposed crux on P3, lead with confidence by Jim.

It was a great day out at a much-underrated crag which deserves more visits – the CC Meirionnydd guidebook has plenty of routes. Another route to look at for the harder climbers is the 25m Skerryvore (E2  5b) as an alternative finish to P2 of Pinky – the only other team that day was on this and they declared it ‘’clean and pleasant’’.

Meanwhile, back in Llanberis Jo, Lucie, Philippa and Kate walked down to the fantastic cafe Caban at Brynefall, then circuitous route up to the new cafe at Lodge Dinorwig (just near the top of the Fach Wen road).

Thanks to everyone for a brilliantly sociable meet, for great food, great company, and excellent climbing – oh, and there was the small matter of 3 days of unbroken sunshine!!

Come to Ty Powdwr for a traditional bank holiday meet. The BBQ will be on Saturday. Please bring food for the BBQ for yourself and to share.

A possible (long) walk on Saturday is a one way traverse of the Glyders from Capel Curig (8am bus advised from Llanberis) toTy Powdwr taking in Y Foel Goch, Glyder Fach, Glyder Fawr, Y Garn, Foel Goch and Elidir Fawr.

On Sunday, the suggested climbing venue is Clogwyn yr Oen in the central Moelwyn range near Blaeneau Ffestiniog, approx the same driving time from TP as Tremadog or Holyhead/Gogarth. The hillside has several extensive crags listed in the (definitive) CC Merionnydd guidebook, and the new rockfax has a limited selection of the best routes, which are at all grades, single pitch and multi pitch.

Everyone welcome including prospective and associate members. 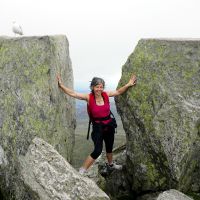 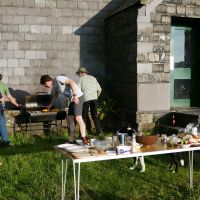 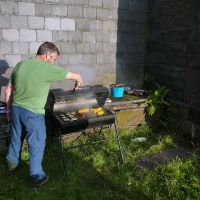 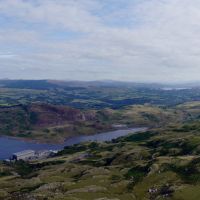