The last time your correspondent visited Cadshaw Rocks was literally half-a-lifetime ago.  My 16-year-old self (without a car obviously) was forced to get the train and hike from Entwistle and my only real memories of the day were getting an ass-kicking  trying to stand on a sloping ledge and then getting rained off and heading to the pub.  Despite a flurry of snow in the afternoon the KMC arrived at the crag in clear cool conditions.

Which lasted about five-minutes.

Before we could even get our harnesses on, a wall of hail and snow swept in from the west and settled on us.  Even Andy’s prediction that “hailstones won’t wet the rock as they just roll-off” was proved false.  He later clarified that only “dry hailstones” roll off the rock.  Frozen Carbon-Dioxide I assume… rare in Lancashire…

Gareth led a very we Central Climb (HS) fwhich despite not really having anything to recommend it somehow gets 2-stars in Rockfax…  As the rock dried out Dan attempted Druids Face (E2).  After struggling on the first half, necessarily eliminating most of the good holds to avoid the extreme polish, Dan reached the half-height gear but was unable to muster the moral fibre to go more than one move higher.  One for another day perhaps.  James, climbing with two colleagues whose names your correspondent failed to record, “made a hash of Overhanging Crack and Split Block Crack”.  I suppose one is often ones own harshest critic!  As the light faded the snow returned (seriously, it’s late April! I got snowed on three times today?!) and the team departed for The Chetham Arms in Chapeltown.

In the pub, armed with some gourmet pork scratchings, the nominations were Alderman, Deeply Vale, Anglezarke and Windgather.  In the first round, Windgather was clearly in front with the remaining crags all tied.  So began a series of negative votes which resulted, much to your correspondents confusion, in the elimination of Deeply Vale.  In the second round, mercifully, Anglezarke was eliminated without requiring any shenanigans leaving Windgather and Alderman in the run-off.  Windgather prevailed so its Whalley Bridge next week for some of the friendliest gritstone in the Peak District.  Always a popular choice and one not to miss.  Assuming we don’t have to approach on skis… 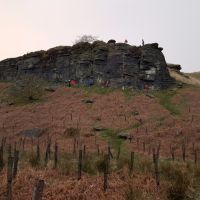 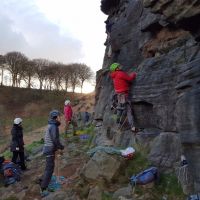 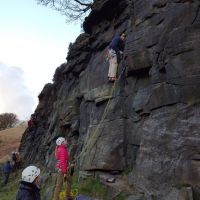 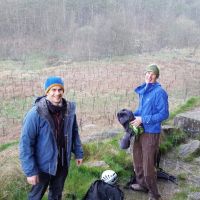