This week saw the KMC dragged out to deepest darkest Staffordshire for their midweek adventure fix.  Unfortunately, El Presidente and ringleader of the Pro-Staffs camp last week was nowhere to be seen.  Did he know something we didn’t about the fate that waited the unsuspecting at Ramshaw Rocks?

It was a good turnout despite looming cloud, the ever-present threat of midges and the twin draws of Andy Murray in the Tennis and Wales in the Euros – but that’s the level of commitment your corespondent has come to expect from the KMC!

Jared and Helen teamed up for Sneeze (E1) which, though short, packs quite a punch due to the fiddly nature of the gear.  Next up for them was Trivial Traverse (HVS) which proved to be not as trivial as the name suggests…  A pattern started to emerge, wherein everything at Ramshaw felt just a little bit harder than you’d expect, specially given the diminutive stature of some of the routes.

Moving further down the crag, Duncan led the colourfully name Phallic Crack (S) followed by Dan and James M.  Helen defied the odds and engaged with Battle of the Bulge (VS) with it’s steep jamming crack still managing to graze despite the protection of a home-made pair of tape “jammies”.  James attempted Gumshoe (E2) belayed by Clay.  A heavily worn cam placement at about half-height protects a very tricky crux section that repelled both James and Jared on lead and finally succumbed to a tenuous finger-lock/heel-hook/mantle combination on top-rope.

Ryan opened his UK trad leading account with the classic antipodean themed Boomerang (VD) which he dispatched with ease, followed by Dan.  Duncan and Ryan then climbed Corner Crack (S) the Clay and James also climbed Battle of the Bulge, followed by Duncan.

James H and Clay finished by battling with Great Zawn (HVS) which although described as “great practice for Massochism” seemed to have a sadistic streak of its own as it extracted its pound of flesh - “bloody gritstone” grumbled James.  As the light faded and the midges descended the KMC retreated to the Winking Man.

In the pub, a model of electoral efficiency to rival the current farce in Westminster ensued.  There we initially 9 or 10 crags on the table which were whittled down to five after your correspondent decided to only allow “serious nominations”.  Laddow was out first closely followed by Shining Clough.  When Stoney Middleton was eliminated we were left with a choice between Witches Quarry and Burbage North.  Despite the beasting the KMC had experienced on the grit that night Burbage North won out.  Classic grit again next week!

As we are heading to Burbage North on Saturday for a planned meet I have decided to over-rule democracy and reinstate Witches Quarry for this Wednesday. 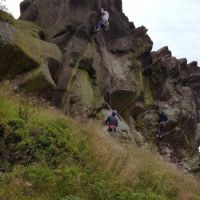 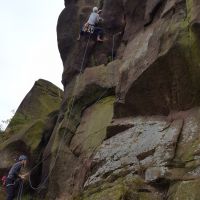 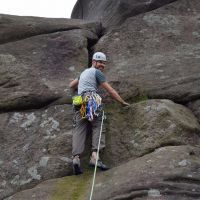