A fine warm day and dry rock – what more could we ask for?   Some initial entertainment would be good?  That was provided by Jim – a very smooth lead of Tody’s Wall – followed rather less elegantly by Andy S and Gowry.

Then Andy made up for his struggle on Tody’s with a masterly ascent of the adjacent Motorcade, E1 5a, to be followed by Jim, Duncan, Gowry and Emily.

Meanwhile, Dave Wylie took Matt (out with us for the first time) and Gowry up the delightful Heather Wall.

Duncan led Tody’s Wall relatively smoothly, followed with less elegance by Emily – then they went off and zipped up the much easier Sunset Crack.

Sunset Crack and the unprotected Sunset Slab (HVS 4b!) had a quick visit from Andy P and Isabel, while Elliott and Gary enjoyed one of the Meet Leader’s old favourites, Terrace Crack.

Andy P made a steady lead of Three Pebble Slab, and was followed by Isabel, Jim, Gowry and Duncan.

Dave W took Matt and then Roger up one of the few HD at Froggatt, Slab & Crack.

At this point we moved camp to the Allen Slab area, where Dave turned his mind to tougher climbing – the incredibly polished Slab Recess Direct.  Matt found this quite hard to follow, and was reminded by his support team that it’s a good idea to take the leader’s gear out before it’s down at foot-level.

Brendan & Jen checked out their jamming skills on Diamond Crack and found them well up to standard.

Gowry led Roger up Gamma – and found it no bother at all after her trips up way harder routes earlier in the day.

Andy S made his first ascent of the delightful Allen’s Slab – how had he missed it for the last 5 years? - followed by Jim and then Roger.

After a steady lead of  the “Top 50” Chequers Buttress with Andy in tow, Jim decided he’d had enough of these delicate routes, and launched up the hand-shredding Broken Crack.  Andy S found the start of the route quite a challenge to follow, and even had to leave a bit of Jim’s gear behind to be retrieved later but rejoiced in the ‘’perfect jams’’ in the upper 2/3 jamming crack, so much so, that when he had been lowered to extract the stuck nut, he re-climbed the route!

Andy P took Isabel up Chequers Buttress, and Roger was entertained to see her fall off at exactly the point where he always fell off himself.

Later Duncan took on the Chequers Buttress challenge – and found it indeed a challenge, even with the encouragement floating up from his belayer, Andy P – but enjoyed it enough to write afterwards “…. a route I really enjoyed climbing and worthy of it's praise”.

Colin and Mary slotted in a quick ascent of Green Gut, then took Roger up another of his old favourites, Sickle Buttress, before drifting off to Sunset Crack then home…

A good day out!

You'll just be back from the Alps?  This is the Meet you need to shrug off the Mountaineering mode and be a rock-climber again....

Plenty of parking in the National Trust’s Haywood Pay+Display car park just off the A625, 400m S of the Grouse Inn.
Free if you have your NT Membership Card with you.
Or if you are early enough, free at the side of the A625 near the start of the track to Froggatt Edge, at 255775.

Fifteen minutes gentle level walk to the crag.
Or if it is absolutely tipping down, 5 mins to the bar of the Grouse - and don’t panic, the crag dries quickly after a shower and indeed after heavy rain.

Just for once I’ll have my mobile switched on.

Something for everyone here – twenty routes at Severe and below, some superb HS’s, several days’ climbing at VS and above:  and classics at all standards.   Six of the top 50 routes in Eastern Grit are here.
Scene of several of my minor triumphs, of one or two exciting moments, and lots of fun.
Plenty of trees to give shelter from the sun, and it’s child- and dog-friendly too.

Sample the well-protected delight of Sunset Crack HS 4b, or the unprotected thrill of Sunset Slab HVS 4b .     The juggy delight of the steep Terrace Crack, another HS 4b.    Or take a rest anywhere on the classic VD, Heather Wall.
Entertain the crowd as you struggle to gain the slab of Tody’s Wall HVS 5a or test your nerve on Three Pebble Slab – another classic HVS 5a, with a KMC story behind it.

Further right still Sickle Buttress S 4a only needs one jam but does need confidence in friction on the little curved ramp that prompted its name, and careful thought to leave the comfortable ledge at the top of the ramp.   It may only be Severe, but the route is far more polished below the ramp than above it….

Lovely open climbing with delicate moves on Allen’s Slab S4a:  in contrast, two athletic moves get you up Trapeze Direct HS 4c.   Or traverse right for Trapeze itself – the popular VD, well-protected at the top only if you are clever enough.

Toward the RH end of the Edge is “arguably the best line on the crag” which our own Nat Allen and Bowdon Black dug out of the ferns in 1948:  Green Gut HS 4a.

Further right, a good collection of strenuous high E numbers (more Elastoplast) then a final classic – the delightful Chequers Buttress, HVS 5a, which gets my vote as the best route on the crag.  I always used to fall off the move onto the arête.  I doubt if I can get that far these days, but I'm sure you will.

Now, before we go home, there are the Froggatt boulders…… 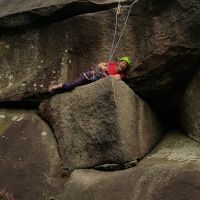 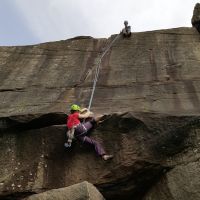 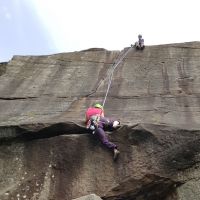 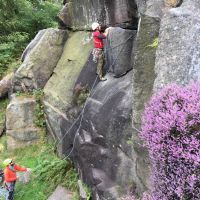 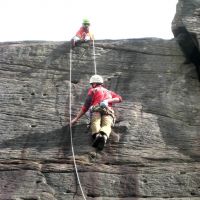