It was with some disappointment that I set off to drive to Monyash, early to avoid the road closures due to the Wilmslow half-marathon, as the weather forecast had been less than encouraging the previous evening. However, as the miles flew by and the drizzle eased off, it became clear that it might be a tolerable day out, with a bit of luck.

I was amazed at the cars parked beside the church and quickly realised that most were not there to participate in any KMC activities, and we were a small but select group who set off in search of Lathkill Dale. I was particularly pleased and surprised to recognise my old friend Nigel Rosenbaum, whom some of you may remember, who had come for a walk as he lives close by (and had read a different forecast!) There was James and George, climbers lost on the way to North Wales who thought the Peak would be the safer option, weatherwise, the old stalwart Roger Dyke and myself.

I was encouraged to discover that the flooding in the upper part of Lathkill Dale, so apparent last week, had disappeared completely and we made good progress until we discovered a large black bovine lying upside down on the hillside. There was some speculation as to how it had met it’s death and at first it seemed as though it had fallen over the cliffs above,but eagle-eyed Roger spotted numerous cow pats on the path which offered a different explanation. Whatever, there was nothing we could do for the poor beast so we continued along the valley in search of a coffee stop, which apparently was long overdue.

On meeting the road at Conksbury, Roger decided to deviate from the meet and follow an alternative route, thus missing out the boggy paths around Alport and Youlgrave, which would shorten the distance. Meanwhile the remaining four of us followed the river Bradford through some pretty scenery and a limestone crag - no bolts though James! This section had the added bonus in that part of the river was dammed to create an outdoor swimming area (sorry Midge, forgot to mention this in the meet details!) However, although the weather was fine and sunny at times, resplendant with rainbows, it wasn’t really the flagg-cracking heat necessary to persuade either of the climbers to take the plunge, despite encouragement from us oldies, and they breezed past with unnecessary haste, believing one of us may have been unable to resist the temptation to nudge them in the right direction. No accidents to report however, so on we trod.

The path strikes uphill at this point and we met Roger sitting at a picnic table just as the rain began to fall. It was only a shower, as it turned out, but since we were about to have lunch, we needed somewhere dry, so Nigel found us a barn occupied by a number of young cows and calves and a tractor and we sheltered for 10 minutes whilst taking some well-earned refreshments. Apparently finding unauthorised shelters is one of the skills he’s developed since leaving Manchester and he set to the task with relish and immediate success!

As soon as we’d finished eating, the sun came out again and we set off on the Limestone Way in the direction of One Ash Grange Farm. Despite a thorough search by Nigel and myself for signs of life, we were unable to either buy ice cream or report the demise of the aforementioned cow. We had come almost full circle and this farm was the nearest to the location of the dead cow, so we thought the farmer might be interested. However, he was not at home so we had no choice but to continue on our way.

We reached Monyash in good time for tea, and I was able to report the cow to the waitresses who showed no surprise at the news and promised to pass it on to the farmer. I have to say I was surprised that the 2 climbers opted out of the last leg of walk and headed off home, as they lost out on tea and huge pieces of cake, kindly bought by Roger. Don’t climbers eat cake these days?

Thank you to all who made the effort to attend, ignoring the negative and erroneous weather forecast. We had a good walk in enjoyable company and hopefully more people will be motivated to come next time.

Meeting place: Monyash, by the church.

I’m trying to get something in the newsletter before I go to South Africa on 14 Feb, so I’m drafting this on the understanding that it may need to be modified nearer the time.

My idea is to do another White Peak walk, this time through the lovely Lathkill Dale, taking in Alport, Bradford and Youlgrave, starting and finishing at Monyash where there is a welcome teashop, of course. It’s so important to keep hydrated when on the move!

There is parking along the road in Monyash and there is also parking for a few cars in a lay by further along the B5055 towards Bakewell, where the path to Bagshaw Dale heads off left. There are also toilets here which we can call at en route. I prefer parking in Monyash as it’s a safer meeting place and I can change my footwear before sinking my teeth into a cream cake, but the choice is yours.

I have walked this route on a number of occasions but not recently and so there may need to be an update on the website in early March. Look out for it, and I hope to see you there. 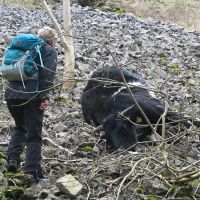 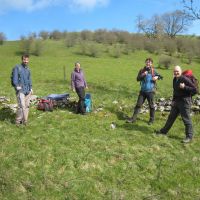 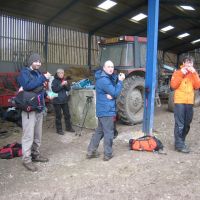