Seventeen members and guests attended at this ever popular Wednesday sunset spot in the Haslingdon hills on a very chilly evening, but at least that meant no midges!

As usual at Troy it was impossible to record all the ascents so just the leads are acknowledged here – and then a few have been missed so apologies in advance!

Emily P started her evening with a lead of left Siamese twin (S 4a) which over the course of the evening received attention from Jack and Andy and numerous seconds. Dave and Jack both lead the other twin. Mucky Pups (VS 4c) had leads from James Duthie whilst Patti got seriously cold on Rapunzle (VS 5a).

Elliot had a fine evening with leads of Siamese Arete (E1 5a), Siam Groove (VS 5a) and Rapunzle (VS 5a). Clay led Jussy HVS 5a and followed several other harder routes.

Duncan had yet another productive evening with several leads including Mucky pups (VS 4c), Troy Groove (VS 4b), Cracked Wall (VS 4c) and No Right Turn (VS 4c).

Jared made a spirited attempt on Pink Edge (E2 5b), one of the few three star routes in the quarry. James Hall made sterling work with the technical Dovetail (E1 5c) but was repulsed by Tess E1 5b – not sure if he had success...

By 8.30 most folk had seriously cold fingers with the dropping temperatures and so to the Holden arms for the usual banter and voting for next weeks crag. Pule Hill and Cows Mouth Quarry were two of the three suggestions but it was classic natural grit of Castle Naze which attracted the most votes. We head south next week! 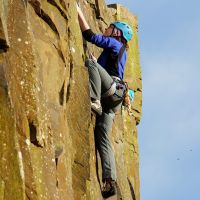 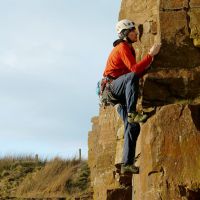