The sun was back so, one week late, the KMC arrived at Running Hill Pits for and evening of quarried goodness.  As they arrived, the midges were mercifully absent which was an improvement on last year’s meet which saw the KMC chased to the Pub by the merciless swarm.

First on the rock was Jared with a fine lead of Plumb Line (VS).  This steep little number packs a punch at the grade as his followers, Dan, Isobel and James discovered.  Duncan then started up the route fighting hard on the steep, sustained central section.  Alas the battle proved too much and, after actually getting past the crux and reaching the final hold slipped of pulling out his top runner and dropping just over half-way down the crag.  Thankfully there were no injuries and Duncan was able to retrieve his equipment by abseil.

James moved onto the biblically named Gomorrah (E1), a fingery crack with slippery footholds. Upwards progress was difficult and the tenuous footholds were causing some slippery moments.  After a couple of attempts the lead was handed to a reluctant Jared who couldn’t get established above James’ high point.  Clearly the shady side of the quarry hadn’t quite recovered from the recent rain.

Over on the sunny side of the quarry Jim led the thrutchy Cave Crack (VS) which packed quite a punch for a short route.  Isobel and Dan followed.  Dan then followed Tim up Hazy Groove (VD) while Jim and Isobel teamed up for Dead Dog Crack (VS).  Dan ended the evening leading Folies Bergeres (HS) in decidedly poor style having managed to take no useful gear and somehow managing to get off route on a straight crack, followed by Jim, Tim and Isobel.

Pati then demonstrated extreme technical prowess by climbing Dead Dog Crack whilst simultaneously placing every piece of gear on her harness in the bottom crack. Spare a thought for Duncan who had to try to follow with gear in all the good jams!  Duncan decided there was time for a final route so headed off in the direction of Folies Bergeres whilst the rest of the KMC headed to the Church Inn for some much needed refreshment.  The vote was between Cow’s Mouth Quarry, Woodhouse Scar and Standing Stones with Standing Stones coming out on top after two rounds of voting and your correspondent accidentally voting for it when not paying attention…

The result of the attempt on Folies Bergeres from Duncan and Pati is not recorded.  The only thing we can say for sure is that as we left the pub in the growing darkness they still had not arrived.  Draw your own conclusions. 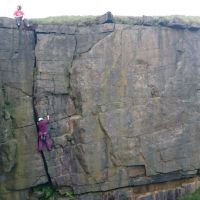 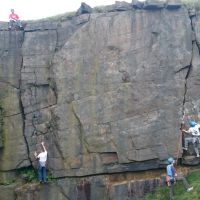 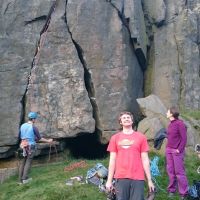