Last minute pre-xmas Scottish Covid restrictions reduced the numbers allowed at FRCC Karn House so we lost a few people and Harry and Rory had to find their own accommodation.

I drove up Wednesday after some family business en-route and on Thursday took a solo walk around Corrie an t-Sneachda to survey the extent of the thin conditions amid a turbo-thaw. The temperatures were so warm that the ascent to the plateau up Half a Point (I) gully didn’t need crampons and neither did the normally icy top of the steep Goat Track (II) in descent. After traversing the base of the bare and black cliffs, only a few straggly ribbons of sad snow in the gully lines, I easily ascended Jacobs Ladder (I) gully in wet snow sans crampons to the plateau then headed back to the ski centre car park. Friday would require some careful thought on route choice!

The forecasts on Friday were for warm conditions and sunshine for most of us, but there was also the winter mountaineering training course! Ron the instructor did a morning of belay and kit training at the hut followed by anchors and abseil in the forest in the afternoon – saving the snowy days for the cooler temps forecast on Saturday and Sunday.

Andy P came up with an inspired suggestion of Pygmy Ridge (Mod in summer conditions) and then a walk over to Stag Rocks overlooking Loch Avon and the Shelterstone crags to descend via Y Gully to access Afterthought Arete – another three star Moderate – a big boot day. It was 7 degrees at the car park when the team of Andy P, Andy S, Stevie, Stuart, Chris, Rory and Harry walked the easy hour to Sneachda along a dry path. The best approach to Pygmy ridge was on stable snow up towards Aladdin’s mirror and then the RH upper snow branch before transferring to rock and grass steps. The rock was still damp and a bit greasy but snow and ice free. Andy P led the first pitch to a good belay 40m up and I followed and led through finishing in sunshine. Rory and Harry followed next with the trio of Stevie, Stuart and Chris. The well scratched but surprisingly greasy granite improved in condition the higher you climbed, and we sat on the uncommonly pleasant plateau edge taking photos of the others and drinking tea. Eventually Andy P and I headed on to Stag Rocks taking a line to the top of Y Gully (I) – Andy descending on the rocks mostly on the left without crampons whilst I opted for a run down the snow with mine on. We reached the turn off at the same time, being reasonably sure that we were in the right place.

Afterthought Arete (Mod) was just brilliant, we moved together the whole way placing bits of gear here and there. Part way up we caught sight of Harry and Rory on a long traverse line in and most of the way down the gully were Stuart, Stevie and Chris. At one point a loose block the size of an American fridge decided to join their team but fortunately stopped for a little rest in the snow! Harry and Rory started late enough to have the added extra excitement of finishing the route in the dark! A proper quality day out!

Gareth and Jim arrived on Friday evening after work so hadn’t had the pleasure of the rock routes we did on Friday so decided on a variant: after heading up to 1141 then across to Stag Rocks they descended Y Gully (I) then ascended Diagonal Gully (I) to access Final Selection, a 4 star Diff (60m) on Stag Rocks then back down Y Gully to do Afterthought Arete (Mod) – both agreed it had been a brilliant day out and that despite the long walk-in Final Selection was well worth 4 stars.

The Winter Mountain trainees, Georgia, Tom and Phoebe – practiced crampon technique, movement on Grade I ground, ice axe arrest and snow belay techniques in a snow bowl at the back of Cairngorm mountain – Ron Walker the guide putting his many years of local knowledge into finding a great venue despite the thin conditions.

We still didn’t reckon it was cold enough to look for a winter route, so another day of mountaineering rock climbing in boots was in order. Andy P, Andy S, Stevie, Stuart, Chris, Rory, Harry teamed up again for a trip to the long rambling Lurchers crag, looking for more dry rock. We all parked at Sugar Bowl then walked in together via Gap a Chalamain with Stevie, Stuart and Chris doing the up and over Creag an Leith-choin top to descend at the gully near the south end whilst the rest of us others descended into the Lairig Ghru walking the tortuous boulder fields to access the far end of the crag…. After some debate finding the routes Stevie led a fine pitch of 60m on 2 star Drystane Ridge (Mod) with Chris and Stuart following. Andy P led Harry up Collies Ridge (Mod) with Andy S and Rory swinging leads. At one point Andy S ended up behind Harry struggling on an overhanging crack (not a Mod, possible 5a move!).

‘’Have you ever heard of combined tactics?’’

A shoulder was duly proffered from a kneeling position, then a standing one, then when he still couldn’t reach, Harry was instructed to ‘’stick your boot on my head’’. Once Harry had struggled up feeling utterly spent Andy walked easily round the crazy obstacle on a wide ledge, feeling like he had done his duty.

Rory found a random car key lying in a pile of debris on the route. He kept it, just in case…. Good job – after we topped out, an ashen-faced Harry turned to me a little way from the crag.

Looking at the stress lines which were forming I decided now was not the time for a wind-up so promptly told him his key was safe with Rory. The look of relief was quite astonishing!

Gareth had spotted another Diff with 3 stars, Crystal Ridge, but this time in Stob Corrie Sputan Dearg, the most inaccessible side of Ben Macdui from the ski centre!

‘’Gareth, who on earth would be daft enough to do that with you’’ I enquired.

It involved a walk in of about 3 hours(!) and a little trip over Ben Macdui from the ski centre car park in sunny but windy conditions and a half mile beyond a descent 300m down a grade 1 gully into the remote corrie. Gareth climbed the first 10 m but ice and snow in all the holds and a bitter wind called a halt and a retreat and a reclimb of another good snow gully. It was then back over Ben Macdui in the teeth of a strong wind. Unsurprisingly they said they didn’t see a soul all day! Whilst it undoubtedly was daft, it was a stunning day!

Meanwhile in Sneachda, Harry and Rory had decided on a quick blast in to climb Jacobs Ladder (I) now in well frozen condition before the drive home. Andy P had left that morning and Chris was having a rest day before his 5 day IML training course.

Cnap Coire na Spreidre was the venue for the KMC training today; Tom and Georgia doing some Grade I and II winter snow climbing and belaying under the watchful eye of Ron. Andy S and Steve had walked up with Ron too, with a promise he would show them some possible crags that were not yet listed in any guidebook. After a descent and solo traversing and a bit of a scout about, Andy and Steve decided on a 25m steep turfy crack line up a great looking granite buttress which finished right on the plateau edge. Half way and and Ron came round the corner.

‘’Great. You found a line of mine – I think I climbed that first. It’s called Dinner Date, goes at about V,5’’. It was excellent fun and after we had finished, we soloed down 150 metres to the far side of a gendarme ridge and soloed up some Gullies and blocks at about Grade II finding an entertaining way to get back to the plateau. A great recce and a venue we would come back to in the right conditions.

Steve was heading back to work, Jim and Gareth decided to pop in to the crag at Dunkeld and climb a rock route. I headed off to have a quick blast up Munro Meall Corranaich, I was going to head on to  Ben Lawers but the wind was way too strong for it to be at all pleasant so I headed back down for the drive home.

Once again, despite the thin conditions we had made the best of it and had a great time anyway – good food, good company, and great hut and some mighty good fun!

The meet is currently full (and oversubscribed!) so no further bookings are being taken

Hut fees used to be £9pppn for Kindred club members, but normal fees are not in operation due to the reduced capacities – as soon as we know we’ll publish the correct fee.

Aviemore lies at the foot of the Cairngorms with easy access to the Northern Corries. For the more adventurous and those seeking to escape the crowds, the Loch Avon Basin may suit better. For those willing to drive about an hour, Creag Meagaidh is available. With all these premiere winter climbing destinations so close, what more could you want? And if climbing isn't your thing, there’s plenty of skiing (downhill and touring), mountaineering and stunning walking. Finally, there's the gear shops and cafes of Aviemore, oh yeah, plenty of pubs too.!! I can highly recommend the local Cairngorm brewery real ales.!!

Provisionally 4 spaces are reserved for those on the training course.

To reserve your place in the hut (training or not) please contact the meet leader - Steve Graham (see handbook for contact details).

If in addition you want to sign-up for the training and find out what options could be on offer, please also contact Steve Graham, who is coordinating this.

The meet, (incl training) is open to full and associate members only (in the first instance).

When signing up to the meet, you may like to indicate what your aspirations are for the weekend. Conditions permitting, there will be several members aiming to climb winter routes at a higher level – this does require prior experience. Please do bear in mind, particularly if you're new to the club or to the winter environment, that an assumption of you joining in at this level might lead to disappointment. Instead, why not first have a friendly chat with the meet leader to discuss your aspirations and what you can hope to get out of the meet. As ever, you should remember the participation statement applies (http://www.karabiner.org/meets/) and acknowledge that you are ultimately responsible for your own actions and involvement. 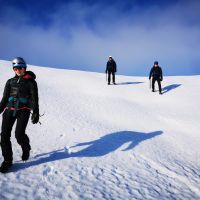 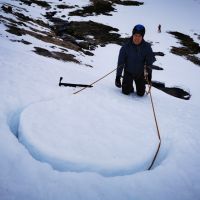 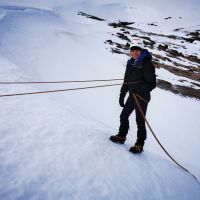 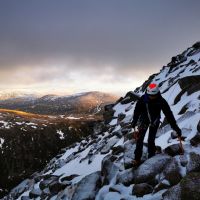 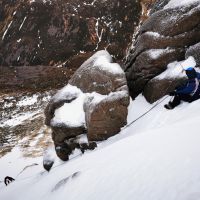 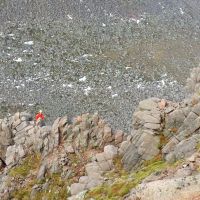 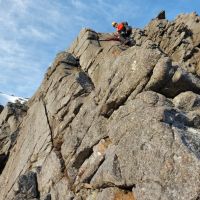 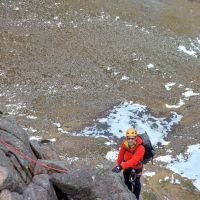 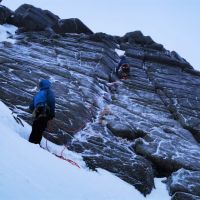 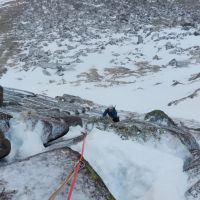 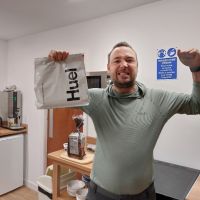