Ahhh, it’s good to be back.  After two years and one virtual gathering the traditional KMC Burns meet returned for a tenth incarnation.

Friday evening saw members drifting in from all corners of the country. It was great to see so many people in the hut again and to catch up.  Your corespondent drifted off to the dorms around midnight in hope of climbing to be had on Saturday. Some continued well into the night.

Dave, Greg, Jenna, Conrad, Tim and Sam drove round to Ogwen in two vehicles.  They found parking in the valley extremely busy with all the lay-bys full - quite a surprise given the time of year and the poor weather forecast.  Parking was eventually procured at £2 a spot at the Gwern gof Uchaf campsite.

Their route took them up past Tryfan Fach and up to the bwlch at the head of Cwm Tryfan. A spot of lunch was consumed before heading east, past Llyn Caseg-fraith, then down over Cefn y Capel and Y Foel Goch. From the foot of the ridge they headed back along the bridleway to the cars.  The total distance was nearly 14.5km (9 miles), with over 770m (2500 feet) of up and down. No major summits, but a pleasant walk in great company and an excellent way of building up an appetite for the Burns Supper!

A large contingent headed south in search of drizzle-free rock climbing and largely found it on Clogwyn yr Oen above Blaneau Ffestiniog. Dan, Ian and Ellen climbed Chic with Ian mostly complaining about the lack of crack of the final “crack pitch” that Dan had promised him (sorry!).  Will, Jon and Claire climbed Kirkus Direct, running together some pitches and generally taking a relaxed attitude to route-finding.  Daniel and Holly also climbed Kirkus with added spice from a stuck cam under an overlap around pitch 2 which was rescued by a swift abseil.  Rob, our resident photojournalist (enforced), took some excellent snaps and then returned to the hut for potato peeling duties.

Andrew and Brian spent the day exploring the slate mines around Angelsey barracks and up around Dalis hole and the inclines encountering many more people around than usually expected for the time of year.

Izy, Laura and Emily spend some time experimenting with hand-made printing in the lounge, creating some minor masterpieces including an intricate KMC logo.

A hearty haggis supper was served and enjoyed. Thanks to all those who contributed to the cooking and washing up - too many to mention.   The meet then moved into the lounge for the tenth iteration of the traditional KMC whisky tasting.  Six drams were on the menu ranging from the very young (a 4 year old Rye), the very old (30 years) and the very strange (The Abomination - artificially aged by some mad Americans).  The dram of the night was the 10 year old BenRiach - a snip at £35 a bottle and proves beyond a doubt that the KMC is a cheap date!

The inter-dram entertainment this year was provided by the four contenders to win the first (and likely last!) KMC Caskmaster Challenge.  There really is no explaining this in a report but suffice to say that if you ever wondered what Jim Symon trying to put on a Whillans harness without using his hands looks like you need wonder no more!  The participants also confirmed that a Helly Hansen thermal thong is officially more useless than Laura’s entire rack (one single nut) and that it is possible to make Jon drive round Yorkshire carrying a tiny bottle of whisky for literally no reason at all.  Caskmaster also explains where those lovely new collages came from.  I suppose you had to be there - unlike Jim on the set of Colditz.

Going firmly against the grain of previous Burns meets, there was some outdoor action had by a number of the participants on Sunday.  Tim, however, continued to fly the flag for Team Debilitating Hangover.

Daniel, Dan and Will headed south to Craig y Castell in search of Creagh Dhu Wall (HS) which was eventually found after some unfortunate detours due to your correspondent’s poor skills with a map.  Will led the first pitch and Daniel the second, both in fine style.  The team agreed with Daniel’s suggestion that both pitches and the 50m abseil descent were worth three stars on their own - a genuinely brilliant route.

Holly, Claire and Dave headed out for one of the classic KMC rounds: up past the slate quarries onto Elidir Fach then Elidir Fawr, along to Y Garn, down to the south to just above the Devil's Kitchen, then west to drop onto the Llanberis Pass road. Along to Nant Peris then back up to the hut on the main path through the slate quarries. About 19.5km (12.5 miles) with over 1300m of ascent and descent.

Holly had promised "a 90% chance of cloud-free summits" using the MWIS App so expectations were high. The skies didn't quite manage to clear on top of Elidir Fawr but once on Y Garn, not only was there some sunshine, the top of Glyder Fawr was visible poking up through the cloud.  The team were treated to an extended display of Brocken Spectres.

Overall another fantastic weekend and it was great to see the hut full again.  Thanks to everyone who attended and contributed and a special thanks to Laura, Izy, Jim, Philippa and Jon for playing my silly games with such boundless enthusiasm.

Finally, quote of the weekend:

"You're asking the person who's standing here putting owls into the microwave?!"

Sums it up nicely I think.

The following is based on the assumption that hut and travel restrictions remain at their current level (i.e. none at all)

You are cordially invited to join us for the 10th annual Burns' Night haggis dinner and whisky tasting at the hut. After a big day out on the hills on Saturday we'll get the fire on and prepare the Haggis either caught (for the carnivores) or unearthed (for the veggies), in time for dinner.

After a filling supper we'll adjourn to the fire side and work our way through six very different whiskies, words of wisdom about the topic at hand and possibly a film.  There will be the usual multi-media delights and fantastic whisky, some audience participation and some unexpected surprises!

Cost (not including hut fees) will about £20-25 but will depend on the number of attendees and the cost of the whisky (not confirmed at time of going to press).

As always it'll be first-come-first-served and numbers are limited to around 25 (for logistical reasons) - there will be a reserve list. Please let me know by 5pm 10th January at the latest if you'd like to join me so that I can get appropriate provisions. Also let me know if you'd prefer you haggis caught (meaty) or unearthed (veggie).  Once you confirm your attendance, I'll ask those intending to have whisky to provide a deposit of £10 so my bank balance doesn't get too mullered procuring the drinks!

Obviously it is over 18s only for whisky drinkers. Non drinkers are equally welcome as the food, the banter, films and photos are an excellent evenings entertainment regardless. The hut is still available for members not taking part in the meet to use, but you should be aware there will be a complete takeover of the kitchen and living room at various points on Saturday evening (there might be room to squeeze in a few extras to see the photos and films).

Finally you should note that this, as always, is going to be a seriously good trip. 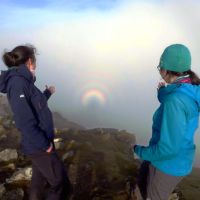 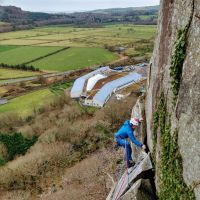 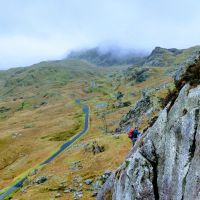 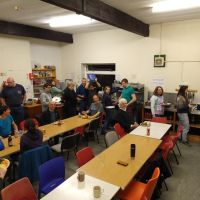