Kinder, a walk on the wild side.

David Rainsbury
Eleven of us gathered on Kinder Rd. in steady rain and a biting wind. Heading up the Snake path we passed the Twenty Trees (all 19 of them) to reach the shooting cabin. From the shooting cabin we headed left to follow path past a line of grouse butts and on to the summit of Mill Hill. Descending slightly to the point where Ashop Clough and William Clough go their separate ways. Here we parted company with Joe and Gowry who headed down William Clough. The remaining nine climbed steeply onto the Kinder plateau, briefly taking shelter behind a gritstone outcrop.
From here we left the normally busy Pennine Way path to head along the northern edge of the Kinder plateau. The views from here are spectacular. Unfortunately we couldn’t see them. This path sees relatively little traffic and the going was energy sapping as we constantly clambered over and around obstructions. This didn’t prevent Neila from indulging her bouldering skill, posing for Dave Shotton’s camera.
It was a relief to shelter for a while at Fairbrook Naze for lunch, still only able to imagine the moorland vista from here as the visibility closed in further. Lunch over we struck out across the plateau, our first waypoint the River Kinder, just east of Kinder Gates. From the point where the stream tumbles off the plateau the peat groughs fan out like the branches of a tree. The key is to constantly choose the line closest to your bearing. As Andy and I wound along one of these branches a hare, pale grey in its winter coat shot across our path a couple of metres ahead. Shortly afterwards Jim spotted two more.
From the high point of this leg the water started to run southwards with us and we emerged from our chosen watercourse a short way east of Kinder Gates. Engage smug
mode.
The option to escape to the Downfall and a shorter route was declined and we struck out once more across the tumble of moss and heather of the plateau, hoping that Kinder Low trig point would eventually emerge from the mist and rain. It was not to be. Jim, striding on ahead had wandered into the branch of a stream which I knew would lead us into Red Brook that decants from the plateau a little way north of our target. We followed it to the edge then took the well marked path leading to the trig point which we found standing on its island of gritstone.
Neila, once again overcome with the desire to clamber on a boulder, demonstrated some amazing yoga skills on top of the trig point.
From here it was all downhill, gently at first to the bronze age barrow on Kinder Low then steeply down the end on on through the knee achingly steep fields past Tunstead House and finally back to Kinder Road. Wet and tired we fantasised about hot baths and showers, dry clothes and hot dinners.

A secret path takes us to the top of Mill Hill then we head for the rugged Northern Edge of Kinder. From there straight across the plateau to Kinder Gates and Kinder Low (don't forget your compass) before descending back to the Sporty for a well earned drink.

Not a particularly long walk but the terrain is rugged at times. A good opportunity to sharpen your nav skills.

This is one of my favourite walks. The effort is always well rewarded. Who will be first to spot a hare? 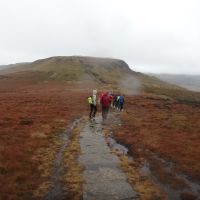 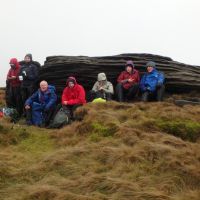 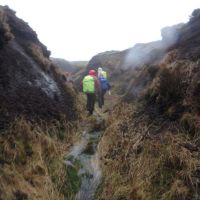 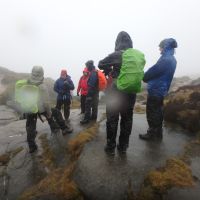 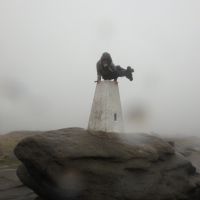