A warm sunny day greeted the members and guests who assembled at Chinley railway station for 9.15am in search of a bit of a stroll in the Peak District, before descending into the fleshpots of Edale. The cool sunshine and gentle breeze afforded superb views from Chinley Churn, Brown knoll and Grindslow Knoll as we wound our way around and over these rolling tops, stopping briefly at Edale rocks to test the bouldering potential and Sheena's finger, before continuing around the plateau.

Observing what have become the traditional tea break stops at 11.00, 1.00 and 3.00 (brought forward a little to synchronise with our earlier start time), some of our party developed a great affinity with the café in Edale, and were heard to call it a day! Brian had warned me earlier that Max would not be up to a long walk and that they would be finishing in Edale, but it was plain to see that once Max had drunk his fill he had energy in abundance, and that it was Brian who was flagging! Obviously the majority of the party felt that their level of enjoyment could not be surpassed and they opted for a variety of alternative activities ranging from the hunt for specs to the inevitable early bath. Undaunted by a distinct lack of enthusiasm for walking, four of us ploughed on to Hope and made it to the station with 10 minutes to spare, although it was 'touch and go' at one point.

There is a rumour that Iain McCallum was on the meet. He apparently left half an hour earlier than the rest of us, and despite helping to rescue a sheep from a cleft in a rock on Chinley Churn, maintained his lead throughout the day, arriving at Hope in time to catch the early train. He parked away from the station to maintain his covert operation and left a note on my windscreen after the event, to say he'd been there. Is this the KMC's own Scarlet Pimpernel? Where will he turn up next!

I hope you enjoyed it; I certainly did, despite limping along for most of the day. I thought the linear route worked well and my only regret is that Iain was not there to distract me from the pain in my knee, and since you're that fast Iain, you could have carried me! That would have slowed you down.

Thanks to all who attended; we must do it again some time.

In an attempt to do something a bit different, I decided on a linear walk which gives the feel of a journey and can be undertaken by public transport completely or just for the return leg between Hope and Chinley.

Meet at 9.00 for 9.15 start at Chinley station. This is a bit earlier than usual but in order to try to accommodate train times from Manchester and the return times from Hope, it's probably the best compromise. There is car parking for 20 cars at the station for those who don't want to arrive by train, but since this is something of a green meet, car sharing is the preferred option, so please try to share.

The route will take us via Chinley Churn and Monks Meadow across the A624 and onto Brown Knoll via South Head. From there the route descends to Jacob's ladder, and follows the contours of Kinder via Pym Chair and around Plateau to Grindslow Knoll descending to Edale with the possibility of refreshments. My intention at this point is to cross the Edale valley to Hope via Hollins Cross, skirt the contours of Lose Hill descending to Hope station. However, this can be shortened to suit the weather and fitness of the party. The distance is approximately 13 miles.

If you are intending to travel by train, the 8.00am from Piccadilly will get you to Chinley for 8.30am. The next train, leaving at 8.30ish, should be avoided as this is in fact a bus and will take 3 times as long. On the return journey, there are trains for Manchester leaving Hope at 16.40 and 17.39 arriving at Chinley 16 minutes later and in Manchester at 17.26 or 18.26. I will be testing people on the timetable during the course of the day!

This is a lovely walk offering good views and a varied landscape, weather permitting, and it would be good to see as many people as possible. For further information or questions please contact me by email. 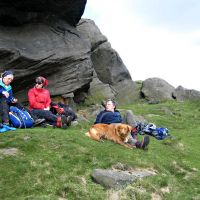 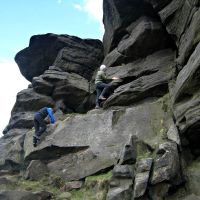 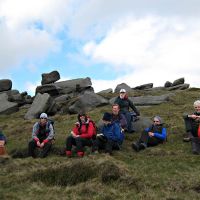