A favourite haunt of the serial tourist provided an entertaining and unusual trip for KMC members and our first organised KMC meet. We met at the car park and paying the Waterfalls Walk fee just in case we were apprehended/arrested. The guy in the pay booth looked a little confused when we, headed in the wrong direction, out of the car park, the opposite direction from the tourist trail, whilst wearing the most strange walk attire (especially the multi coloured jazzy legged Ding) and carrying wetsuits and canyoning rucksacks. We didn't see the no swimming instructions on the leaflet handed out – it must have rubbed off in the water. So Mark, myself, Chris Williams, Ding Koy set off hoping that the delayed Michelle and Mark Garrod would meet us somewhere in the gorge and be able to find us.

There being 2 river valleys nearly in parallel it's quite important to chose the correct one as one is more serious than the other and probably not canyonable (a future trip maybe –any takers?). During the recce a week earlier we had been told by the TIC, Thornton Force had gone totally underground (maybe not too safe to canyon it then!) due to the low water levels. They said it had been an unusual year, given that it was the first time it had had frozen solid the cold winter conditions since the 1960's.

Heading through the village we were met by the Gestapo in full uniform (we were tempted to give them a punch in the face – but held back knowing they were only in character for the day) and the various people carrying guns etc was only due to the 1940's event being held. In any other rural village it would have initiated a few helicopters and police snipers, but I assume they must have let the ‘relevant' people know….

An ideal warm sunny day, and a good amount of water due to heavy rain during the week meant there was to be deep swimming sections, and strong currents especially at the get in at the top of the gorge up above Beezley Farm. I have fond memories of camping here at ‘sheep poo farm' aged 15, whilst putting up my tent in the dark - a common experience of all Duke of Edinburgh Award rookie teen backpackers - I recoiled in horror as I pushed my tent peg through a sheep's afterbirth… fortunately the lamb had vacated it first, otherwise I might have been having kebabs for breakfast… see previous sheep story…

The get in was cold, despite the sunshine, and Ding at that point regretted her refusal to borrow two thermal tops on the basis that she'd be ‘too hot' (ha), I believe you can never be ‘too soft'. We changed discretely into our dayglo wetsuits and buoyancy aids and tried to blend in with the scenery with our ropes, helmets and buoyancy aids. It was straight into tricky and wet abseils, (useful training for Llanberis climbing then). The force of the water tried it's best to whip our feet from under us but we made it down in one piece into the first short and deep swimming section, sorry… I didn't see the no swimming sign.

The first part of the gorge is open with a few short falls to ab down, some slides and then shallower rocky sections which can be floated down (wombling is the official term for those in the ‘know').

Just before entering the deeper Baxenghyll Gorge, Michelle and Mark appeared (the experienced and ‘hard' wild swimmers of the club – and they must be, only having shortie wetsuits brrr!). We backtracked a couple of falls first with them, before entering the 'point of no return' (well, apart from the obvious tourist path which runs alongside). From here on, the abseils got more tricky with a few barn door swings into the steep rock walls, however all were well protected with solid bolts… if you knew where to find them.

Being down in the gorge gave a very different perspective of a well walked route, and some views which are rarely seen from the green mossy coated walls. A tree abseil, a belay device which went for a permanent swim, led us further onwards. With the path high up, the gorge narrowed down to the width of a small ‘bum' and to get down it Chris had to first remove the log blocking the channel. The chute was small but powerful and the water sucked us down and under into the aerated water of the jacuzzi. A more open section followed with one final biggie 30ft fall - this has been kayaked by a friend of ours (another kayaker with him took a swim here and took up golf after that), and an abseil down a greasy slab into the pool. Four hours of sliding, scrambling and swinging led to a swimming spot where Michelle showed us how hard she was by swimming in just a cozzie.

We tramped back to Ingleton to participate in ovaltinies and lots of cake and then more cake.

Sunday was a sharp contrast to Saturday with the cloud down on the 3 peaks and rain clouds approaching from the west. We stayed optimistic about climbing and with Chris and Ding met James Williams and Julien Bodard up at Twistleton Scar. The crag felt harder than it should have in the strengthening winds adding to the feeling of exposure. The creatively named ‘left hand (polished as hell) crack v.diff and right hand crack (severe) were ticked off, with ‘hand jam crack' (severe 4b) finished as the heavens opened… as an alternative we offered a repeat of Ingleton Falls with wet wetsuits and thermals and strangely there were no takers…

Meeting at Ingleton Falls car park about 10.30am (£4.50 ticket). Walking 2km on paths upstream to Beezley falls then a wild and wet descent back to Ingleton (water levels permitting). Tea & cake in Inglesports cafe. Equipment needed: harness, abseil plate, helmet and wetsuit or suitable clothes and footwear for full immersion/swimming. We have some spare buoyancy aids.

We hope to be at Twistleton Main Crag about 10.30am. The crag is a limestone escarpment about 50ft high with all grades of trad routes and terrific views - see Yorkshire Limestone guide. To find the crag take Oddie's lane out of Ingleton, between the 2 rivers, following this for 2.5 miles to Twistleton House Farm. Park here - honesty box about £1.50 and sign in on a book. A path leads up to the crag in 5-10 minutes. 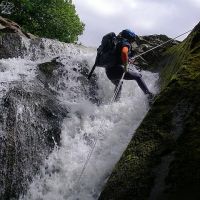 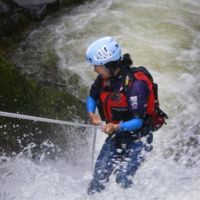 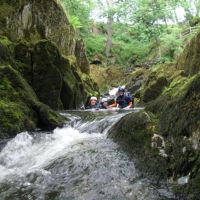 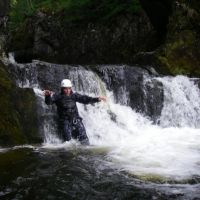 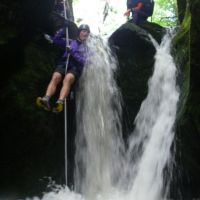 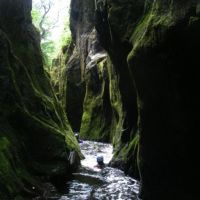 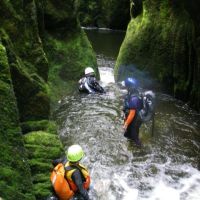 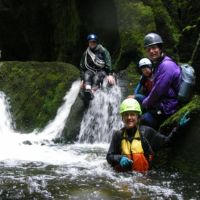 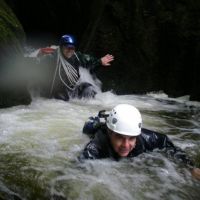 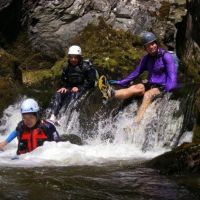 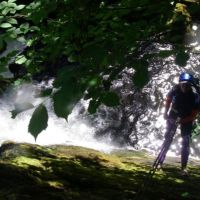 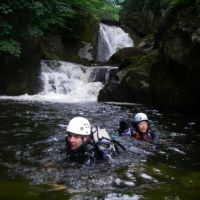 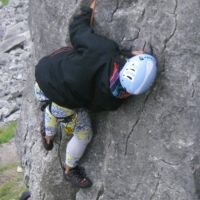 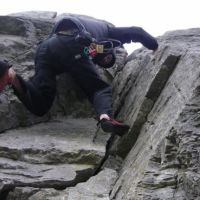 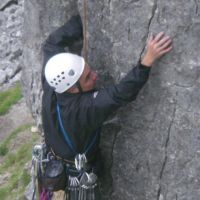