I know it was a last minute decision to take over responsibility for the meet, as it seemed a shame to let such a good venue and hut opportunity go begging. However if I had realised all the fuss there was to be with hut keys yet again, I probably would not have bothered. At the time of writing, they have still not materialised such are the iniquitous ways of the Royal Mail. Fortunately, Jim and Sandy (together with roaring fire) were already in residence when Sylvia dropped me off on the Friday night after a long slow journey from Devon. Laura and Kate arrived shortly afterwards. It was good to see both old and new faces and listen to tales of Arctic endeavour.

Saturday morning dawned damp with low cloud obscuring the tops. This did not deter our intrepid band. The Gregsons, along with aspirants Laura and Kate, went via Chapel Stile to Little Langdale, and into the tunnels of Cathedral Quarry, then into Greenburn to ascend Wetside Edge, down to the Three Shires Stone at the top of the Wrynose, then climbed up to Red Tarn and Pike of Blisco before a return to Raw Head.

I was after a more challenging day so opted to go for Scafell Pike via Rossett Ghyll and Angle Tarn. It was on and off with the waterproofs most of the way but by the time I had passed Esk Hause a steady rain was falling accompanied by a brisk wind. And then I was overtaken by first one, then another and eventually hundreds as I made my way over slippery rocks. It was the weekend of the Borrowdale Fell Race, and so any thought of a quiet day on the fells disappeared, as did most of the mountain features in the dense mist that enshrouded Scafell's summit cairn. Thoughts of traversing over to Scafell via Broad Stand were quickly dismissed mainly because of the conditions, and so I retraced my way back to Esk Hause. It was here that the weather suddenly bucked up as the clouds lifted like a curtain to reveal all of the Langdale peaks and so I carried on over Esk Pike and Bowfell in greater heart. There were plenty of photo opportunities in the evening light as I made my way down the Band and enjoyed a refreshing pint in the ODG garden. It got even better when a chap I engaged in conversation offered me a lift back to the hut.

Sunday morning was no different to the previous day with light rain falling and very low cloud. Laura and Kate disappeared back to Manchester with excuses about involvement in some or other Marathon event. Sandy and Jim declined any such thoughts, and went up The Band to Three Tarns, then W to find Slate Crag on the back of Bowfell (a clean crag looking out towards Hard Knott and Eskdale, only developed in 2007), followed by a climb N through Ore Gap, down to Angle Tarn and back via Rossett Gill.

I opted for an ascent of the Langdale Pikes, and as I was sitting on Harrison Stickle enjoying an early lunch, again the clouds parted and a fine day ensued, even if the ground was quite wet from all the previous rain. A girl I met had a very sticky time traversing over from the Stake pass. I made my way over to Pike of Stickle, taking in the extensive views in all directions and even Scafell Pike made an appearance. It has been a long ambition to record climbing on Gimmer so I carefully descended the steep prow of grassy hillside sandwiched between Pike of Stickle and Loft Crag until I located a suitable perch. After a long wait a climber appeared on âD' Route and so I got the photograph I was after, with dramatic lighting painting the valley in rich colours.

On returning to the hut, I noted Chris and Bob's names signed in the book, but alas missed meeting up, as they had still not returned by the time Sylvia arrived to pick me up. It transpired that they were in the NDG supping after a marvelous day tramping over Silver Howe, Sergeant Man, Pavey Ark and Harrison Stickle. Bob's feet are much improved it seemsâ¦

Thanks for all those that did attend this very much last minute meet. I think it was well worth the effort. Raw Head has been much improved recently, with proper stairs to the dorms, double glazed windows and excellent bathrooms.

P.S. Roger, I hope your blister has healed! P.P.S. And Ding, do get some wheels!!

Sean Kelly has gamely stepped in at the last minute as meet leader for the above weekend at the Rawhead hut in Langdale.

The Great Langdale valley, in the shadow of the magnificent Langdale Pikes, is of course a time-honoured climbing and walking location. Climbers can get to grips with routes of various grades on the Lakeland rhyolite of nearby Scout and White Ghyll crags, while a longer walk-in leads to classic mountain routes on Pavey Ark and Gimmer Crag; other crags worth a visit in the area include Raven Crag (Walthwaite) and Black Crag. Meanwhile the Langdale Pikes, Bow Fell, Crinkle Crags and Pike O'Blisco should offer plenty of opportunities for walkers and scramblers to enjoy a grand day out. Local refreshment possibilities include the Old and New Dungeon Ghylls and the Sticklebarn.

Accommodation is at the FRCC's Rawhead Hut, Raw Head, Great Langdale (grid ref: NY304067). At the time of writing there are apparently only 6 spaces remaining - please contact Sean as soon as possible for exact details of bargain price and breakdown of male/female spaces available, and to secure your place at this cosy and beautifully situated hut!

If you don't manage to get into the hut but would still like to go on the meet there is also the National Trust Great Langdale Campsite (slightly less cosy but with good facilities) further along the valley at grid reference NY287058. 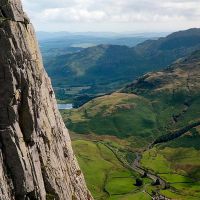