Failed locks on BOTH external doors couldn't keep us out! (Photo: Dave Wylie) 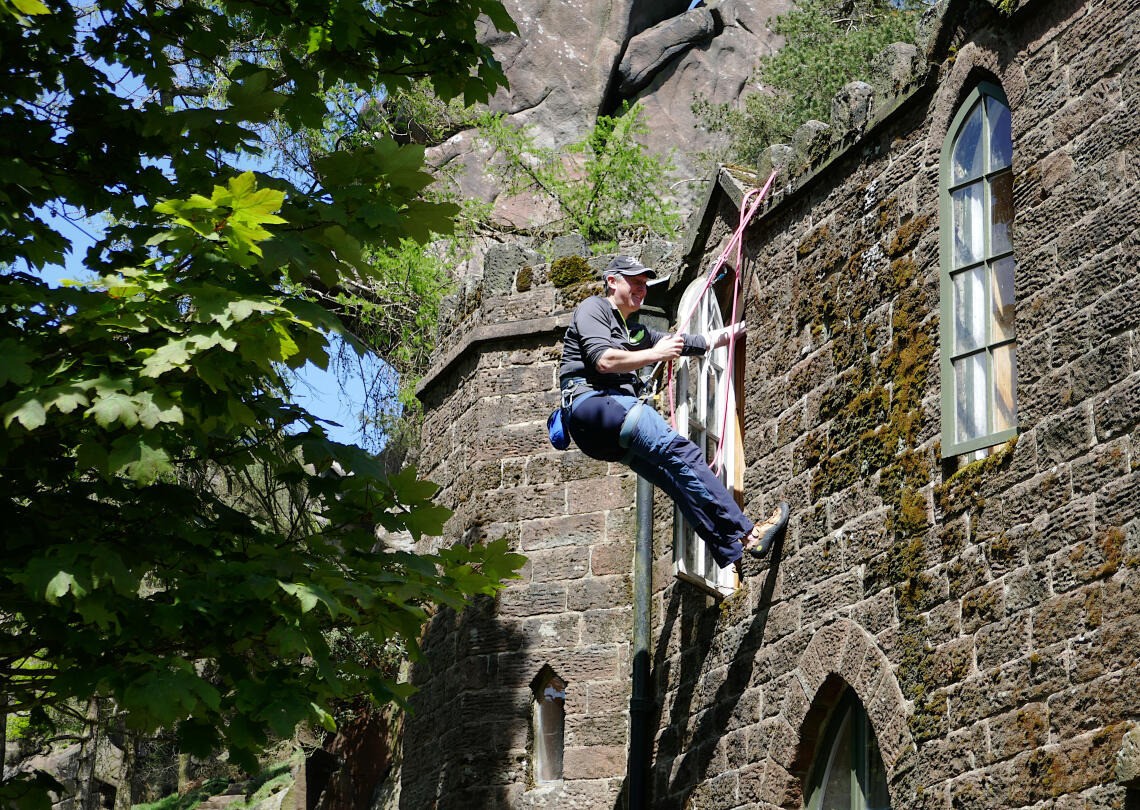 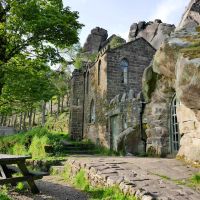 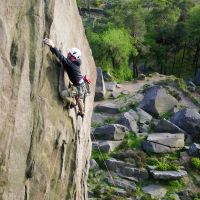 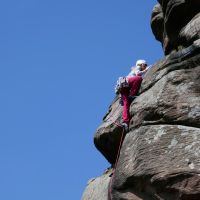 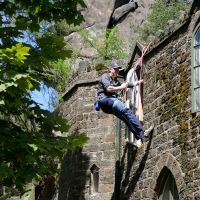 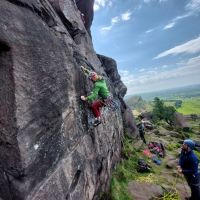 30 members and guests over the weekend

10 on Sunday, dull till coffee time then another lovely sunny day, contrary to all weather forecasts.

Well done Mark, for abseiling over the roof and down the front to let us in thro a dorm window after the digital lock decided not to let us back in.

Michelle set a high standard for the Meet by making her first HVS lead on the Friday - Diamond Wednesday - and another - Batchelors Buttress Direct - the following day.  But, she emailed, "The alternative finish I inadvertently made to Left Hand Route (S) on Saturday seemed to be the only topic of interest, until I pointed out the alternative parenting methods to a 'large' group of non-climbing visitors to the crag. The threats of violence being hurled at Stevie and the innocent belayer of a certain Andy P, who was teetering his way up Hawkwing (E1), brough more spice to the route than usual and Andy P almost broke a sweat. "
The warm sunny weather weather encouraged most of us to have a fairly easy day on Saturday, but Caro and Steven, despite late arrival, fitted in Steven's leads of Inverted Staircase, Heather Crack, and Prow Corner Twin Cracks:  then Caro's lead of Prow Cracks.  Then......  "we had a lovely sunset/moonrise evening social outside the hut. And a night time drive back to MCR with our road kill (so that’s good!)".
The Maplesons paced themselves....  "Bridget and I went up to the upper tier which was busy and noisy but no one was on Black and Tans and no one was gearing up below it so took a pitch each. I got first lead. Had forgotten how traditional that first pitch is. Then enjoyed being gently toasted on the belay as Bridget led through. Followed up with Pedestal Route with B taking the first lead. By the time we finished everyon else had cleared off to watch some football match.   We should probably have done a bit more but it was very warm."

Stu H maintained the Hut's traditions by bivvying on the kitchen roof - surely the snoring wasn't that bad Stu?

The totally inaccurate weather forecast for Sunday discouraged many from driving out for the day - but the reality was a lovelly dry day, and just the right temperature for climbing.
Pedestal Route was attcked again, and alongside it Technical Slab saw a very steady ascent by Andy Pierce.
On Sunday afternoon, everyone decamped to Hen cloud, for a change of scene and a thorough sandbagging. The Arete, (VDiff) was just about led by Michelle with the moral support of Mark P.  Andy S led Modern (VS), with more alternative finishing, followed by Stevie and Stuart.
Trish and Al joined the party just in time for the move to Hen Cloud, and wrote afterwards:  "It was a lovely atmosphere and really nice to catch up the climbing, and chat to old and new folk.  Actually it's the first time we've really thought about climbing again.....    Hope I didn't ruin anybody's digestion anyone with my tiffin!!"
No Trish, we just put on inches round our waists......