I was delighted to find that, despite rather gloomy, damp, morning weather, 23 people had turned out to join me for a stroll round the South Pennines. We set off in intermittent rain and headed up towards the Pennine Way via the "Roman" road (which is probably not Roman at all, more likely to be medieval).

Once up on the tops, there was no shelter from the Westerly winds. We didn't stop for the traditional elevenses - partly due to the later than normal start, but mainly because of the rain which was now pretty constant. Nobody seemed to want to do any climbing in Cow's Mouth quarry when we passed, either! Instead, it was "heads down" as we headed North along the track by the reservoirs.

The weather gradually began to improve as we descended via the Catstones. Lunch was taken at the valley bottom, next to the Rochdale Canal near Walsden. This was the point at which the Perry Clan joined us for the rest of the walk, bringing the total to 26 including baby Ben. Also, as an extra surprise, Jane and Phil Jackson (not KMC members, but know to several of those present) happened to pass us as they were out for a walk along the canal tow-path!

After lunch we headed back uphill, on the other side of the valley. The rain had stopped by now and the sun eventually came out to help dry us all off and warm us up a bit. Using a combination of the Rochdale Way, the Pennine Bridleway and some pathless cross-moorland navigation we managed to get to Shore Fold without losing anybody. The remainder of the walk used paths cunningly chosen to avoid walking through too many streets in Littleborough. There was one main road to cross and a somewhat flooded field to negotiate, then it was under the railway, over the canal and we were almost home.

The group temporarily split up at this point: those needing to get back to their cars headed on to Hollingworth Lake, the rest followed me through the field straight over to my house. The returning car park group were then directed (Thanks to Alan W.!) back through the local streets to join us.

The conclusion of the day's activities were far more strenuous than the walk. It is extremely hard work having a birthday, especially a 40th! Large quantities of tea just had to be drunk, then candles needed to be blown out before the huge amounts of mandatory cake could be eaten.

Many thanks to Christine and Kate for evicting me from my own kitchen and taking over brewing duties. My kettle broke down merely in anticipation of the quantities of water to be boiled (it had worked OK first thing in the morning, honest!) so we had to revert to pans of water on the stove.

We were joined at this point by Zoë, Martin and baby Alex - they had been for a walk along the canal towpath, but not managed to meet up with us. They can have a meet tick anyway! Jim and Judith Symon also came round to join in, but (as they didn't even try to meet us for a walk) they only get half a tick each.

Thanks to everybody who came along - I had a great day. I hope you all enjoyed it as much as I did. Extra thanks for all the cards, cakes and presents. It was so good that I think we should make it a Club rule that all KMC members must have a birthday every year!

For those who aren't going up to Scotland to play in the snow this weekend, here is an alternative in the form of a more local Sunday walk.

I'm planning to start at the Hollingworth Lake Visitors Centre (Grid Ref. SD 939 152) at about 10am and head up via Lydgate and the "Roman Road" onto the Pennine Way. Going North along this will take us past Cows Mouth Quarry and the Warland Resevoirs. We can then descend into the Todmorden valley via the Cat Stones, which will give us a choice of an easy way back along the Rochdale Canal towpath, or various longer options if we head up again on the other side of the valley. Final details can be decided on the day depending on the weather. The short version would be about 10 miles, but it can be extended as much as we like!

As this meet will coincide with a Significant Birthday for me (according to some sources, life begins at this point), people are welcome to drop in at my house before the walk (from 9am onwards) for a cup of tea. After the walk everyone is welcome to come back to my house for more tea and, if anybody takes the hint(!), perhaps some other refreshments...

If you need more information (to find out how to get to my house or to the starting poing of the walk), or have any other queries, then call me! 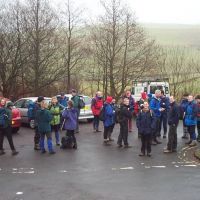 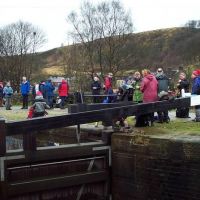 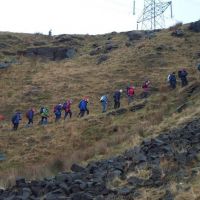 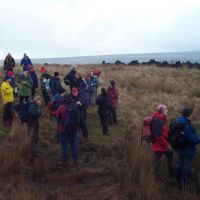 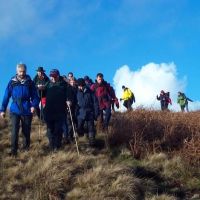 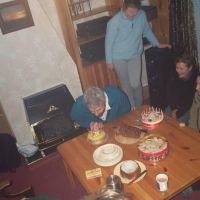