As usual for one of my meets it was raining in Manchester. So set off with umbrellas. The gloom and doom stopped after cresting the Snake pass. No ice cream van in the surprise view car park. Met Mark and Chris, collected Trish and headed for the Great Slab and Cioch areas. Mark obliged Chris's desire to see how climbing was done by practising some self-belaying to retrieve an obstinate rope on Boomerang. Ken found us and produced a small drinks cabinet of intricately carved oak. From within this he produced several bottles of Tempranillo, apparently just medication. Al led a route with James which looked like it had been climbed but wasn't in any of our varied guides. The route started as for Boomerang but went straight up, so they considered calling it Stick.

Spurred on by this Al ticked off all the nasty routes around, and on, the Cioch, dragging James (and any other fools) behind him kicking and screaming. James perfected a primitive impulse reaction engine by shouting short words loudly in a downwards direction causing him to rise majestically up the route. Colin lulled us by choosing nice routes to second, then snuck off and bagged Lyon's Corner House direct without pause for thought. Chris popped Eartha into his growing out door bag.

Trish demonstrated the use of delicate fingers on Cioch Diagonal, to the dismay of her seconders. Richard said he enjoyed the practice he got for night clubbing on Cioch corner.

And so it went on. From the Book of Excuses - Can't do that route, I'm going to a wedding and won't pull with hands oozing pus. I hang my head in shame for not using public transport. However Mark, Colin and Roisin deserve three cheers, as they did use our highly efficient rail and bus network.

Cheers and thanks for the umbrella. [If more turned round reports this quickly? Ed]

Due to a typo in my part the meet will be at Millstone, time 10:00, just above Hathersage. Trains on Sunday from Manchester Piccadilly at 08:09 pass Stockport at 08:19 and get to Hathersage at 08:56. Last return to Stockport and Piccadilly leaves at 22:16. However, the timetables start anew on the 20th May. So it may all change.

If you choose to use a car, make sure it's full of people and park it next to the ice cream van. The van should be located in the Surprise view car park on the A625, it's round the bend, on the flat, after rising out of Hathersage for 2 km. I imagine the car park will involve money.

There is quite a bit to do there, all types and scariness, all types of grade. Bring sandwiches and sun cream. 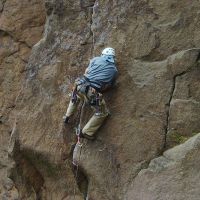 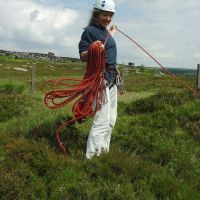 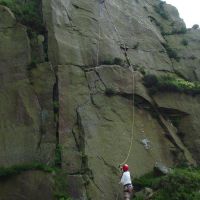 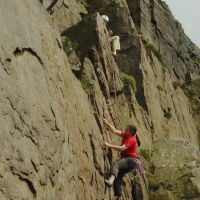 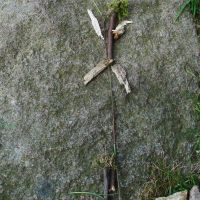 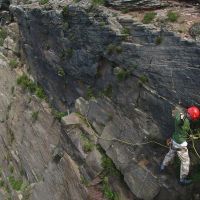 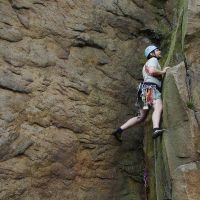 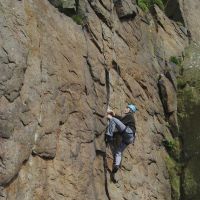