When I volunteered to lead my first KMC meet at the club hut I wasn't entirely sure what the weekend would hold. So many possibilities coupled with so many uncertainties. We could do a winter traverse of Snowdon Horseshoe but would there be any snow? We could bag a couple of routes on Trinity Face but would there be any ice? We could enjoy some fine malt whisky in the hut's fabulous, wooden lounge but would there be any glass in the door of the stove enabling us to light the fire and keep the room warm? And playing in the back of my mind all along was whether or not anyone would actually turn up. After all, since becoming a dad for the first time back in September, I'd not managed to get down to the pub to recruit people for the meet and the forecast for Snowdonia didn't look as promising as in the other National Parks. So with all this uncertainty and doubt I set my expectations low and hoped for the best.

Yet I needn't have worried. What did happen on the meet, whilst unlikely to go down in the annals of KMC history as epoch-making, countered all my trepidation and then some with what proved to be a fantastic weekend.

There were two aspects to the meet. First and foremost, as with any KMC meet, was the mountaineering side which varied from ice climbing on Sinister Gully, to walking the Carneddau, through to being blown up and along a couple of easy rock climbs. Secondly, to help with the upkeep of the hut, there was a maintenance side to the meet which involved cleaning or repairing an item over and above the usual pots, pans and worktops with a prize going to the cleaner of the most unusual item.

When I arrived at the hut around 8:30pm on the Friday I was greeted by Al and Dave Wylie and given a rundown of all the jobs undertaken by Dave during the course of the afternoon. Keen to win the spoils for the most obscure item cleaned, not to mention his commitment to keeping the hut in good working order, Dave W had completed a number of tasks before I arrived that were varied, certainly unusual and there were plenty of them to boot.

The table below shows the extent of Dave's toils. I've added in a grading system that most of you will be familiar with to demonstrate both the overall difficulty and in some cases the technicality of the job. The jobs have also been given a star rating to show just how unusual some of them were.

It goes without saying that Dave won the prize - a third or so of a bottle of 10 year old Macallan Fine Oak. Despite knowing the prize was already won, lots more useful jobs were carried out by everyone on the meet including various light bulb replacements, dorm cleaning, extractor fan cleaning and repair. Thanks to everyone for doing their bit. The hut was definitely left in a better state than when we arrived.

"But enough of all this talk of cleaning, this is a mountaineering club not the Mother's Union!" I hear you cry. So on to the outdoor stuff....

The snow that fell as I left home on Friday evening had all but gone by the time I had descended the mile downhill into Macclesfield and there was no trace of the white stuff when I arrived at the hut. So, with nobody able to gauge what the conditions would hold, a plan was hatched to try Trinity Face on Snowdon under the assumption that, as a north facing buttress, if anywhere was to be cold enough for some winter routes that would be the place. To make the day more interesting we extended our plans to include a walk into Cwm Glas, up along Clogwyn Y Person, then round the top of Garnedd Ugain and down to the col to position ourselves for the drop round and down to the foot of Trinity Face for a route to Yr Wydda (Snowdon summit). The homeward leg would take us off the summit by the Llanberis path and the nameless ridge to the north of Cwm Glas and back to the car. A great and full day in anyone's book and you'd have thought the planning would stop there.

However, not content with a ridge scramble, winter climb and the two highest peaks in Snowdonia and encouraged by a couple of glasses of Old Stubby and a wee dram or two, a zany twist was added to the plan. Al figured that if we awoke at 4am and started the day at 4:45am we could be back at the hut for breakfast and an hour's kip before hitting the slate quarries for an afternoon of sport climbing. Now I can't remember if we ever agreed to this but when I awoke with a thick head at 7am and realised I was the first up I knew we would be doing the more modest, original plan.

So after a hearty brekkie by all Al, James, Dave and I headed off to the Llanberis pass to start our outing and Annie, Roger and Heckler headed off up the Carneddau. James got in touch with Mark who aimed to catch us up somewhere in the Cwm Glas.

The weather was OK but not particularly cold so we set our expectations accordingly and took just the one rope and a basic set of gear between the four of us. We almost left the rope behind, assuming (wrongly as it turned out) that the routes wouldn't be in nick and that a straight forward scramble would be as difficult as the day would get. Had we not decided at the last minute to pack one just in case we would have all been somewhat annoyed at an opportunity missed.

On arrival at Cwm Glas we took the decision to climb up Parsley Fern rather than the ridge of Clogwyn Y Person. The wind had definitely got up and the ridge would have been getting the worst of it. Not only that, the frozen gully looked a more exciting proposition as there seemed to be some good ice glistening in the otherwise grey light of day. We donned our crampons, got out our axes and used the time James needed to work out how to fit his shiny new spikes to grab some food and a hot drink.

Replenished and ready for action we headed up the lower left part of Parsley Fern at which point Al picked out the silvery line of Sinister Gully which to our amazement looked to be in condition. We soloed up to the grade IV pitch at which point we roped up and Al led the way up the short steep section, bringing the rest of us safely up after him in various styles of ascent! We de-roped for the top couple of pitches and eventually found our way wearily to the summit of Garnedd Ugain and into the teeth of a vicious Sou'Westerly bringing with it biting frozen snow and thick cloud. We didn't hang about. Abandoning any plans to carry on to Trinity face we headed quickly off the summit plateau and down out of the cloud and wind, through the rain and back to the car. A great mountain day, if a little shorter than planned.

Whilst this was going on Roger, Annie and Heckler had been blown around the Carneddau and Mark had got up to Cwm Glas and played about on various bits of ice below the rest of us.

Evening time saw plenty of good food cooked and super, homemade cake devoured including my famous (well sort of) Gingerbread and a delicious Lemon Cake from Kasia who was unfortunately too under the weather to come on the meet as planned. Lots of whisky was drunk and tall tales told, getting taller and longer as the drams were downed. The forecast for Sunday was poor with 80 MPH winds predicted on higher ground, not a day for getting up high. Instead Mark, Dave and I headed down the Fachwen Lane to a small outcrop on the other side of the hamlet. The wind was pretty strong but that didn't stop us bagging a couple of easy routes before heading back to the hut for a spot of lunch to keep us going for the journey home. A fitting end to a great couple of days.

This will be the first KMC meet I have organised. I'll leave it up to you to decide whether my lack of experience in this area will make for a more exciting, unpredictable meet or just a chaotic gathering of folk with only their passion for the mountains of Snowdonia in common. Either way I promise it'll be fun.

Plans for the weekend will obviously depend on conditions/weather (will we have a proper winter this year?) and what people want to do but it would be great to see a few of us do a winter traverse of the Glyders or perhaps the Snowdon Horseshoe via Crib Goch's less popular but equally stunning North Ridge.

As the meet will be at the club hut I don't need to know exact numbers but it would be good to know who's likely to show up so I can ensure I bring enough whisky. "Was that free whisky, I heard?". Yes it was, but at a small price. Anyone coming along to this meet and who wants to get the full tick (and a wee dram of Yorkie's malt) will need to clean or mend something around the hut in addition to the usual pots and pans. Prize for the most esoteric item cleaned or repaired.

Drop me a line if you fancy coming along. 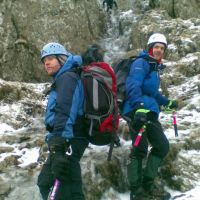 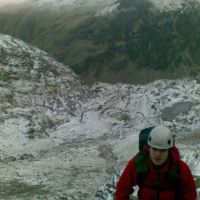 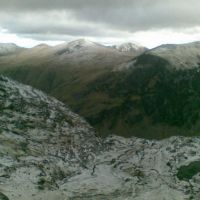 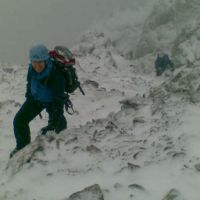