With the meet leader stuck at home in self-imposed (swine?) flu quarantine, the five climbers who went to her meet at Brimham Rocks had to fend for themselves. As Dave W. had suggested this crag, he felt obliged to attend and even compile this meet report. Of the guests, Mark and Jo had already been on several Club meets, but it was the first KMC outing for Andy - who was making his first foray back onto the rock after a 17 year gap! That explained why his gear looked so traditional...

The team started off around the Lover's Leap Area, where ascents by some or all of the group included:

The older Yorkshire Gritstone guidebook lists Lover's Leap Chimney as V-Diff, so Wavey's lead of this was, presumably, a little bit easier than the lead done by Mark, who had the newer edition of the book.

Moving next to Cracked Buttress, two routes were enjoyed:

Only Mark and Jo tackled the harder of these routes. The previous team on it had left a camming device stuck in the crack, but this resisted all further attempts to extract it. Wavey declined to lead the route: perhaps because it is only a mere V-Diff in his guidebook and so not enough of a challenge for him?

The neighbouring blocks of Cleft Buttress provided the final entertainment for the day:

Dave W. led the former climb, which is the easiest route up this collection of rocks. As there is no simple descent, a combined abseil/human counterweight technique was required to get the team down from the top!

Mark did a fine lead of the somewhat harder route here and Jo provided everyone with some amazing sound-effects as she seconded it. Goodness only knows what other visitors to Brimham might have though was going on...

The weather was superb all day: warm, with plenty of sunshine and only a light breeze. It was so good that the team climbed on for a bit too long and so, unfortunately, the tea-shop had closed by the time they finished.

It's a long drive to Brimham from Manchester (and the National Trust car parking is rather expensive), but it was well worth the effort.

Meeting at Brimham Rocks, meet from 1030hrs at the Lovers Leap area. A good mix of routes and very family friendly if you wish to bring the kids.

Very popular area and the non-paying parking options fill out quickly. For those new to the area, follow the track past several of the boulders (!) to the toilet block then head South-west from the open area, to find the Edge most likely at the northern end of the Lover's leap section. If you have large friends bring them - they will help cushion a fall. Ed. 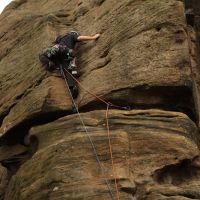 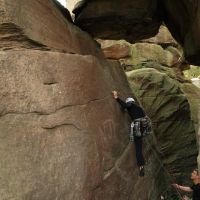 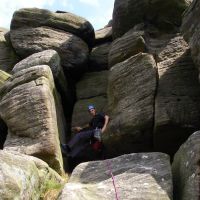 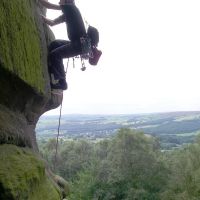 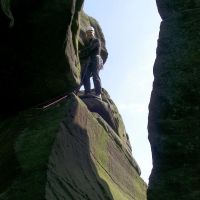 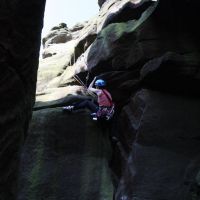 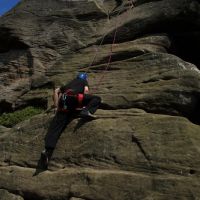 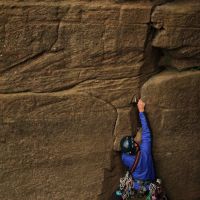 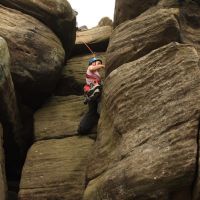 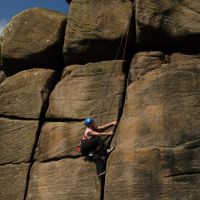 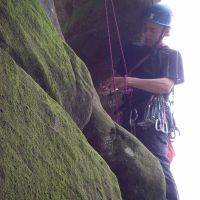