Someone should report on North Wales so at least you know what you missed. I drove out to Conwy on Friday lunchtime, no problems there, just for a couple of hours walk before continuing to the hut. Parking at Sychnant, I headed for Tal-y-fan across the frozen wastes. Fine going until the signs of human traffic were left behind, then it was hard going - little signs of the path and the soft powder snow was at the level of the Gorse bushes, and they didn't bear any more weight than the snow. Passing one walker giving up, I made height on the ridge side. Not long after brought to a halt by ever deepening snow, at waist height with the waving tips of tufted grass hinting at what was to come and a suspicious flat area on the starboard bow. About turn, for a laborious return over the moor, then off to the hut.

The road through Deiniolen was clear, but turned to rutted, packed snow-ice on the curve before Bus Stop (the circle was gritted for the buses). The side road beyond was as expected - a sheet of packed ice so left the car with several others off the turning circle, and proceeded to the hut on foot - the track was completely impassable by normal vehicles for the whole weekend. First person at the hut - somewhat surprising. Still, everything seemed to work and whilst cooking Dave turned up. Somewhere around 10, hopes of anyone else stomping in faded. A quiet party for two...

Saturday proceeded to start fine with good hopes of visibility on the tops so I went round to Ogwen, parking on the roadside below little Tryfan (Dave W later tried a circuit S from Ogwen). Headed E parallel to the A55, then crossed it in a snow shower, skirted the buildings then contoured the snowy hillside. Had intended heading for Pen Llthrig y Wrach, but the sight of the untracked snowy waste caused yet another trimming of ambitious plans. Reckoning on the ridge having thinner snow in the wind I overtook several parties on the long ridge to Pen-yr-Helgi Du. Yes the going was easier here and the views of snow covered hills were magnificent. Craig yr Ysfa looked fine but no signs of climbers - there was little ice about over the weekend, the snow had buried everything and locked it down at source with no thawing. However, watching the tentative approach of others on the descent to the col, I opted for crampons for a more efficient traverse (and a bit of a climb) over the head of Craig yr Ysfa. On now for Carnedd Llewelyn over deeper snow, the tops unfortunately now sitting in wind driven cloud. After wandering about on the flat top, as the wind filled it in, I failed to follow the supposedly well trodden way, so time for navigational practice, dropping off the rim and contouring round until the slope aspect led me off on the shallow ridge to Carnedd Dafydd. Somewhere round this as the light dimmed I checked the time and decided on a direct descent for Ogwen. Negotiating the very badly parked cars on the roadside I drove past Ogwen and returned to the hut by road and foot, finding Dave already there and no-one else.

Not so good on Sunday with an overcast sky, stronger wind and a hint of a thaw on the way. Off through the Pass to the foot of the Watkin path I went, planning on a Southern version of the Snowdon Horseshoe (also too ambitious). Up the path to the waterfall, then cut NE across the stone bridge on a little used path that rose attractively through woods and contoured the slopes of Lliwedd. I was soon above the snowline and once more battling with the drifts. Immediately past the last mine buildings the drifts peaked, and I had to backtrack a few times. Eventually just below the top of Gallt y Wenallt, I came to a wall remnant, where, as the wind was now blasting ice spicules at one, it was a suitable time for lunch in its shelter. It had taken ~2 hours to get this far! Now the thoughts were of when would I turn back...

Onwards for Lliwedd, the cloud right down and not a soul to be seen (nor much else - just when was the ridge going to start?). Just as I hit the ridge and thought of heading straight home, the cloud lifted and the wind eased, revealing a wonderfully snow clad Lliwedd (no chance of Snowdon appearing though). Up to the first top and once again the crampons made for more efficient progress, meeting people for the first time, including a party bound together with ropes and very stationary (why?). They were still in the same spot as I bottomed on the col and the cloud came down again. I desultorily headed for Snowdon but a check of the time showed in the conditions that it'd be sunset by the earliest I could make it (even if possible), and that the continuation towards Yr Aran was totally out. Thus I decided to pick up the Watkin path and head down. However the path was completely buried - this side of the mountain was the dumping ground for all the wind blown snow and the slopes (what could be seen of them) were near continuous, soft snow. Rarely have I expended as much effort going downhill, just heading on a bearing for the valley floor - I doubt that many would have reached the summit this way. Somewhere near the bottom it started to snow, which turned to sleet - the air was noticeably warmer. I squelched up to the car at around 4 and had a bit of entertainment in the blizzard over the Pass. Back at the hut it was a lonely evening as Dave had returned to Manchester.

The Sunday dawned cold and sunny but with lenticular clouds sitting on the hills, there was obviously a cold wind about, so with an early return required I headed round to see Aber Falls. I would have liked to have done a short circuit above the falls, but after an abortive attempt at traversing the avalanche debris on the left side (at one point narrowly missing sliding down either the outer or the inside of the shell of snow), I opted to try some way to the right. Mistake - more deep powder on top of heather etc. meant it took an hour to gain ~150m and I stopped, defeated, just below the powder cornice. I settled for the return around the western rim of the valley on rock hard ground, not without a few skids and bruises.

So where was the KMC? Hopefully having fun somewhere?

Just turn up for this one. Traditionally many KMC members turn up at the hut for New Year celebrations and the occasional Walk/scramble/Climb/Bike (and even odder things) on the hills. 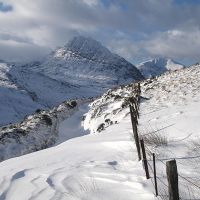 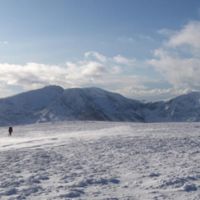