This meet was in the midst of the big snows but while following the forecasts through the week there did not seem to be a clear reason to cancel the meet due to the weather at least. Conditions on the ground looked interesting though with the first question, would we be able to park?

We couldn't get into the original car park - a 3m high pile of snow was in the way, and the access road was drifting over! So we parked on the roadside in the village (the main road being kept clear by a stream of ploughs), where the two Daves met Bob. We waited outside the Pub for the last 2 likelies, thus meeting Andy on his first (atypical) meet. At10:10, having given up on more attendees, we started off down the hill - straight into the deep snow between the walls. This was continually knee deep, and with plunges to greater depths (the top of the wall gave slight respite, being rickety and full of gaps), with the navigation with no reference points being shot to hell as well, it thus took an hour to get the first mile done to the bridge over the river. We nearly persuaded Andy to walk the plank first ‘bridge’ as an initiation. From then on we stayed on the roads, as the next track was an ocean of snow between the walls, though the road had metre high drifts across it and no vehicular access. I should say that the weather was ‘OK’ – very cloudy and misty, generally dry, but with quite a bitter wind (conditions were supposed to deteriorate later, hopefully towards the walk end).

Our next track was blocked by a 4m high pile, so we joined the original route later - another wall enclosed, drift hell that led to a major cross roads. It was now getting on for 12 and the way onto the moor was a sea of white (and we were on the lee side of the hills) so I dropped the original plan that was unworkable and stuck to a short low level circuit - starting by heading for the A640 over the field. This was another half mile of wading, past the reservoir – I couldn't find the paths for the snow so we dropped into Denshaw and took the A672 out to get some speed up. Then another footpath sign led us into a trap - we were dropping in up to our waists and there was barbed wire in there somewhere. Another route was reluctantly abandoned and at 1330 we sheltered for lunch in a collapsing hut (further collapse threatened by the farmer digging snow out with his tractor on the bank above). So then it was back into Denshaw and another road out to the pass - then picking up the original route onto Crompton moor - the drifts had cornices here! Once on the top the going was easier on scoured icy grass, and we met the (only) 2 walkers of the day. We also met more massive drifts at the next track that fortunately bore just enough weight to prevent a full depth plunge. We were back at the cars at ~15:15 as the snow got going. We made good our escape…

Once back at work I heard from Dave Wylie who had hoped to meet us part way round. I enclose his account here to complete the day’s story. I think he may have been more determined (is that the right word?) than the rest of us. Thanks to those who came along for an interesting day.

I set off from home at 10am and walked up from Hollingworth Lake, up past Dry Mere, then cut over to the Pennine Way just North of the M62. I went past Windy Hill and crossed the A672 at around Noon. According to my calculations, I should then have encountered you coming in the other direction somewhere in the vicinity of White Hill. I continued South on the Pennine Way to where it crosses the A640. I loitered there until about 1:15pm, in case your meet had been delayed by the conditions, but there was no sign of you. There was no indication that anyone else had been walking in that area either (no footprints in the snow at all, neither North nor South of the road). The only other person I saw was a mad cyclist trying to push his bike through the snow up the (blocked and closed) A640...

If I had met you, then I would have joined your meet and gone back North with you over White Hill again, down the ridge and then veered off somewhere later to head back home.

As it was, I decided to make my walk into a circuit, so dropped down the snowbound A640 a short distance and started off North along the Pennine Bridleway. The snow on the track at this point had drifted to at least 20 feet deep, so I had to detour slightly! I continued North, past some of the "various reservoirs" before heading back over to Hollingworth Lake and home.

I've done that circuit, or variations of it, many times in both directions - but it has never been such hard work! It's about 12 miles and, normally, I'd estimate that it would take me less than four hours.

Yesterday it took me nearly six. Snow, ice and wind made it pretty "interesting" and I was pretty tired by the time I got back home. 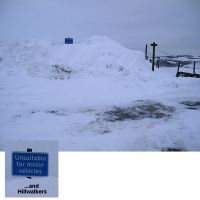 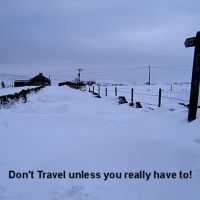