Well, I said it would be a long day, and it certainly was. On a bright, sunny morning, Roger and Neville arrived at my house at 8:00, and we set off. It didn't help when my car hit a roadside rock on the Wrynose pass and punctured a tyre. Fortunately, Roger and Neville combined their hundreds of years of experience, and had the wheel changed very quickly.

All the same I was half an hour late when I was met by a small, patient and enthusiastic group at Brotherilkeld. At 10:30 we started walking up the Esk valley, trying to ignore the deep pools that invited us to jump in, and eventually reached Great Moss, where the views opened up spectacularly. From the foot of Ill Crags, the scrambling was soon underway, and we swarmed up a series of slabs.

We came to a stop at the foot of a large imposing slab halfway up the crag. I had soloed this on the trial run, but volunteered to take a rope up. It was not needed, however, as the rest of the party, obviously inspired by my stylish ascent, decided to solo. A very fine pitch !

There was plenty more scrambling up to the top and enough scope for people to pick their own path, with Dave Moon being particularly adventurous. We reached the summit of Ill Crags at around 14:45. We were on top of Scafell about an hour and a half later, having had afternoon tea, scaled Scafell Pike and then Broad Stand, which, to my shame, I had never done before.

At this point I thought it would be an easy stroll down the south ridge to the road. The route looked straight-forward on the map, but this proved to be deceptive and it was a foot-sore party that reached the cars at 19:15 !

A long, but very memorable, day.

This will be a long day, but well worth it in my opinion. It's a fairly long drive, either via Ambleside or the Duddon Valley, but with the benefit of relative solitude.

Meet at the telephone box in Brotherilkeld, just over the Hardknott Pass, for a 10:00 start (GR 212012). A long and beautiful walk up Eskdale leads to Great Moss, which is surrounded by the Scafells and the Bowfell range. Ill Crags is to the right of Scafell Pike, and it's possible to link up a lot of clean rock for 1300 feet, with a particularly fine slab in the middle. There are possibilities for roped climbing towards the top, if you can be bothered lugging the gear !

From the top, it is a short slog up to Scafell Pike, and if time permits, we could also carry on to Scafell via Broad Stand, and then back down the ridge to the cars (or the pub).

Walkers are also welcome as all the scrambling can be bypassed!

I hope to be at the pub on the Thursday before the meet, or you can contact me at home to discuss details, car sharing etc. 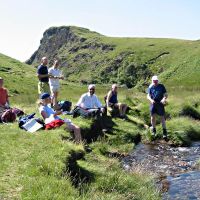 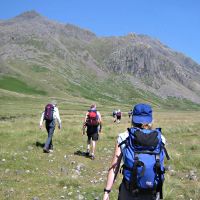 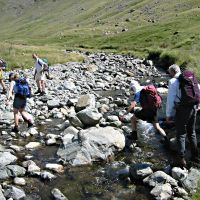 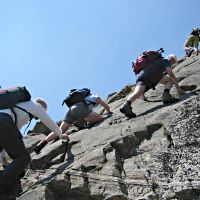 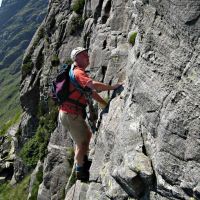 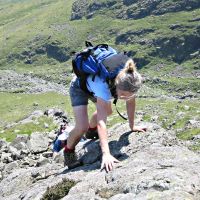 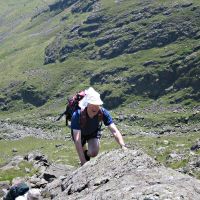 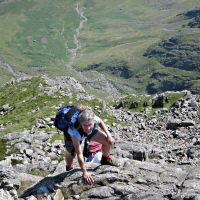 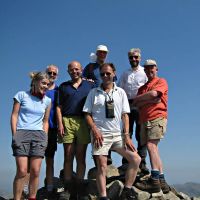 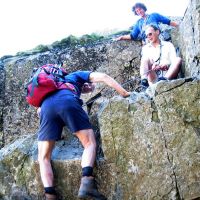