Absent Guest: John Handcock (A man could lose himself in London).

"It's just a bit of sea-mist"?I first said this on Friday night driving past Penzance. It was the sort of mist that makes you think - I've dragged people 350 miles past the hideous traffic demons of Bristol and we can't even see 100 yards?at least we've got some scones? An ideal first meet in fact! Got to the campsite (the Sea "View" - sorry folks, not recommended for the views or the price! never mind) at midnight on Friday; Mr Wylie was putting the finishing touches to his tent, Messrs. Bone & Major (as well the Presidential palace and the Secretary's office) were already concealed in the fog. We were joined later by Andy, Wavy & Margaret, much later still (Saturday pm!) by Christine & Julie!

Saturday morning was even mistier, I thought I could see stocks or perhaps a ducking-stool being built, but it was hard to tell in the fog. Playing Frisbee in drizzle will only entertain for a limited time, you see. Can't climb in this, I thought. Rick had other ideas, however, and on a wave of optimism (I'm sure I faintly heard the Beach Boys as we left the campsite) most of us went to Chair Ladder. Whether too sensible or too realistic, the Wavy bicycle crew did some pedalling instead. Incredibly (tell how familiar I am with sea-cliffs - where I grew up is, by British standards, quite a long way from the sea!) from the cliff top was a clearing view and lots of inviting granite. The start of Terriers's Tooth isn't very accommodating for a VDiff, though - at least the Elvis impression was over early! Smashing route. Rick and Rob climbed Pegasus and Ariel, while Duncan & Sabina enjoyed Bishop's Rib, then The Spire (good effort, that) and Diocese. (Team Skinny climbed Diocese later in the week, I shall compare gibbering notes with Craig about the traverse, not to mention the bottom pitch). Corporal's Route, with in-situ Fulmar, was also done. A very good day, all things considered. Muttered rumours were heard from other parties at Chair Ladder that the mighty Bosigran was open, we returned to the campsite optimistic, further buoyed by the arrival of Christine and Julie, and the opening of the Tupperware containing the scones...

Rather than the azure skies deserved by the solid KMC turnout at the end of the land, Sunday morning served up more mist, accompanied by an increased "sea breeze". Bosigran was the destination, once again we miraculously avoided the sea-clag and much windblown granite (the stuff with the green beard at the top) was ascended. Team Skinny climbed on the Ochre Slab, followed Dong and naturally Ding. Dave and Tony (I must confess to wondering how these two fellows can communicate when 150 feet apart on a windy day! Their powers are quiet, but strong) ascended Paragon, Armchair and Nameless. After Thin Wall Special, Duncan & Sabina departed to Sennen for more fun, including Africa Route (the one with the naughty start). Rick and Rob chose Little Brown Jug, Doorpost and Venusberg, thoroughly enjoying themselves in the process. As far as I am aware there was also a KMC assault of Commando Ridge, all troops returning to base with cheerfully windblown faces. I do believe Mr Croughton also climbed up Alison Rib; this sort of behaviour can only be encouraged! Finally at 8:30pm I located clotted cream in the heaving fleshpot that was St. Ives, returning triumphant to the KMC enclosure. The scones were washed down with Sheena's Old Tart, can't say fairer than that!

Folk gradually dispersed on Monday, but not before Dave Wylie finished his business at Sennen, a fine lead of Demo Route, by all accounts. The unfortunate four left behind for the rest of the week had to contend with azure skies and glittering seas?Thanks for making the effort folks, and sharing a very good Spring Bank Holiday.

p.s. (we also decamped to Trewellard, quieter, cheaper and better all round than the Sea View, remember this for next time!).

The meet is on! Enough of the granite is open...O Yes. A recent successful reconnaisance mission resulted in excellent climbing in the sunshine at Sennen, Land's End and the magnificent Chair Ladder. So dig out the tent etc... and join us (well, me at least) for some classic routes! Unfortunately due to the ongoing f & m disaster the walking possibilities are limited, but surfing/lying on a beach/looking through telescopes (20p) at distant tankers are among the other possibilities...I will also be baking a number of scones as part of an attempt at a cream tea.

The campsite is the Sea View (Grid Reference: 357252 on OS Landranger Sheet 203, but even I found it instantly at midnight so it's easy to spot). Basically drive a very long way down the M6, M5 & A30 to near enough the end of the land; after bypassing Penzance, continue towards Land's End - ultimately you will pass the black & white 'First and Last Inn', the campsite is about 300 yards on the left. The facilities are pretty good with shops & pubs nearby.

Some routes to consider would be:

The atmosphere, views and quality of the climbing will make the trip well worth while - even if the scones may not...we shall see. See you there, or in the pub for a chat beforehand. I will either be found in a small green Vau De tent or (fingers crossed) a very large blue and yellow structure. 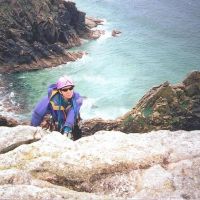 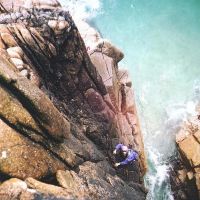 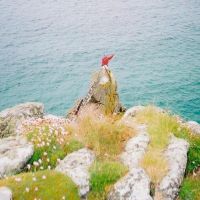 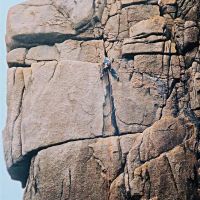 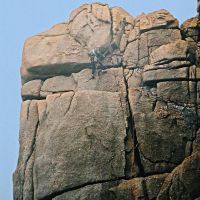