This turned out to be a classic day on gritstone. Sunny conditions ensured a good turnout and the lack of a car park ticket machine was an added bonus. No, I didn't take a sledgehammer to it the night before but obviously somebody had. A 25 minute stroll uphill took us to the top of Dovestones edge where we sat in the sun and admired the clear view. The climbs were in the shade but the crag was dry if a little dirty in places and the rocks were soon plastered with KMC teams, many visiting the crag for the first time.

I was very impressed with the variety and quality of the routes. My new guidebook gives stars so making it easier to choose the plums. By mid-afternoon it was time to stroll across the tops to Ravenstones. Here there was less choice of routes and the whole crag seemed more intimidating, partly due to the very steep ground below. Members of the KMC in the 40's were prominent in developing these crags and one of Derek Seddon's photos, taken on a typical gritstone day, is the frontpiece in my 1965 guidebook.

We finished the day by walking down to the overflow tunnel entrance below the crag. On the way down we were amazed by the damage done to the streambeds by floods earlier in the summer. Huge amounts of water must have come down turning the rocks white and shifting massive quantities of silt and monster boulders. Fortunately the streams were quiet on Sunday so the planned return through the mile long tunnel took place. Ten of us went through. A few people resorted to paddling through whilst others tiptoed along the slippery edge. It was quite awkward to keep your feet out of the stream in the middle, but only one of us fell in didn't they, Joanne. Mark kindly walked round with a rope to help us out as the exit iron ladder is missing. When Duncan came through we removed the rope but he had no trouble in climbing the vertical stonework unaided.

Weather, rock, company and shortcut home made for a fantastic day, I hope you all had as good a time as me.

These two classic crags in the Chew valley contain routes of all standards. In my guide there is nothing above HVS. Long ridge at Dovestones is 75ft. and a brilliant v.diff. Ravenstones, half a mile away along the top, also has some long routes. Wedgewood crack at VS is 70ft and reckoned to be a classic although I've no first hand knowledge of it. I'll be leaving Dovestones reservoir car park about 10am (there is a charge on Sundays), and walking to the top of Dovestones edge. I don't reccommend an approach from below. After lunch I'll saunter across to Ravenstones for more sport. Intend to do at least one climb on each crag whatever the weather. Be lassic. Be there 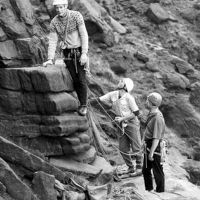 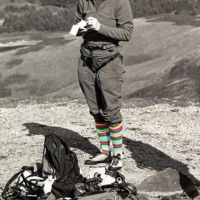 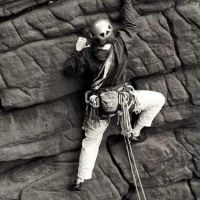 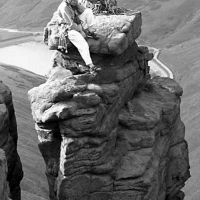 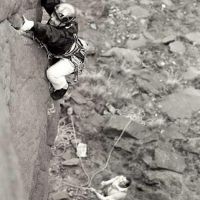 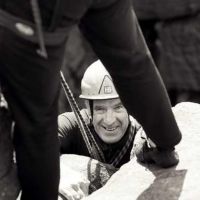