Guests: Lucy Blue; Terry Garrod (brief visit to hut), Mike Whitehurst (met up and climbed with Gareth but didn’t make it to the hut!)

There was a smaller turnout than for this meet than at the equivalent one last year, possibly not helped by a mixed bag of weather. Conditions did however improve over the course of the weekend and some worthwhile climbing was done!

Friday
The day was mainly dry. Emily and Lucy arrived early (via Pete’s Eats and the Llanberis ice cream shop), to be joined briefly by Mark, Michelle and Mark’s dad Terry who called in bearing cake from their stay further east on the North Wales coast. Others arrived by various means, including Carolyn who was staying in Caerwys and caught the train to Bangor where she was picked up by Gareth.

Dave Wylie arrived later in the evening after travelling via Bala and stopping off to ascend Arenig Fawr (854m) and Moel Llyfnant (751m) from the minor road south of Llyn Celyn.

The evening was somewhat brightened up by chocolate cake for the meet leader’s birthday.

Saturday
The day was wet, windy and cold; inspiration was lacking in the morning and most people didn’t venture from the hut then, although Gareth and Lucie took a trip to Llanberis by car and Carolyn walked down.

In the afternoon, Emily, Lucy, Dave S, Dave W, Lester and Carolyn went to Caernarfon to investigate the Book Cave second hand bookshop (in the basement of Porth Mawr Jewellers on the High Street by the castle gate). After a thorough collective browse of their mountaineering and outdoor literature, and purchases by Emily and Dave S, everyone retired to the nearby Wal Café for very fine tea and cakes (although sadly the cake choice was restricted due to a lunchtime rush!). Afterwards Emily and Lucy drove back to Manchester, while the others went back to the hut for the evening.

Sunday
The weather was wet and claggy at the hut and again it was a while before anyone was inspired to action. Eventually Gareth, Carolyn, Dave W, Dave S and Lester drove through the mist across Anglesey to Holyhead Mountain in the afternoon in search of better weather. This didn’t initially seem too promising as the usually-obvious mountain wasn’t actually visible from the nearby parking area and took a while to find in the mist.

Nevertheless after locating Quartz Wall, the teams braved a couple of routes in the damp and mist - Gareth led Tension (VS 4b) seconded by Carolyn, and Dave S led Contestant (VD) followed by Lester and then Dave W.

Conditions improved after this however, as the sky brightened up and the rock dried up nicely. Carolyn and Gareth remained on Quartz Wall to climb Tempest (S) with Carolyn leading, while the others moved along to Central Slab where Dave W led Slab Direct (VD) followed by Dave S and then Lester. It was noted though that despite the later improvement in the weather, it was quite windy at the top of all the routes when climbed.

Lucie meanwhile had sadly been feeling unwell and had stayed at the hut having a ‘duvet day’. The Holyhead Mountain team returned at about 6pm and spent the rest of the evening at the hut.

Monday
The weather finally improved on the Bank Holiday Monday, which turned out to be quite a fine day.

Mike (‘the Bike’) Whitehurst set out early from the Manchester area to meet up with Gareth on Anglesey. Here they did a couple of fine routes on Gogarth Main Cliff, namely The Strand (E2 5b) on the Upper Tier, and Aardvark (E2 6a) in the Emulator Area, alternating leads on both (although Mike apparently led the harder pitches due to Gareth having a sprained ankle).

Meanwhile Dave W, Carolyn, Dave S and Lester opted for the esoteric Craig y Tonnau near Dolwyddelan, a steep slab of solidified lava about 15m high apparently also known as Rippled Crag due to its unusual horizontal undulations. There appear to be some discrepancies between route descriptions, not to mention grades, in Rockfax and UKClimbing.com, but after some comparative investigation we settled on the following list of routes climbed!

Meanwhile Dave S led several of the same routes seconded by Lester, namely Diane’s Approval, Central Crack and Robbin’s Nest (possibly the most obvious lines on the crag), as well as an easier line (D-VD?) to the left which appeared to match the description (if not the S grade) of Dentist’s Slab in UKClimbing (but not Rockfax) – anyway it was an obvious line up a series of lichenous incisor-like flakes which seemed to fit the route name!

As Dave Wylie pointed out later, the eight routes we climbed between us accounted for over half of the routes listed at the crag!

Meanwhile Lucie had another duvet day back at the hut but did some cleaning and reading.

Everyone had headed off by Monday evening, apart from Dave S and Lester who stayed on for an extra night.

Tuesday
Dave S and Lester finished cleaning up and left the hut about 11am.

This will be something on the lines of last year’s Big Bank Holiday Beltane Birthday meet – so simply come along to the club hut Ty Powdwr for a free-form meet with lots of scope for climbing, hillwalking, mountain biking (or possibly even kayaking etc) as usual!

As well as affording the opportunity to celebrate May Day (or alternatively the ancient Celtic festival of Beltane) and (hopefully) the onset of warmer weather in the beautiful surroundings of Snowdonia, the holiday also coincides with the meet leader’s birthday so there is likely to be cake... 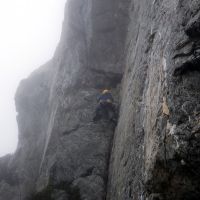 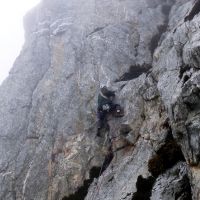 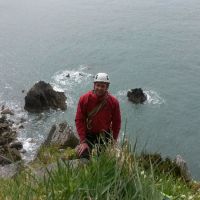 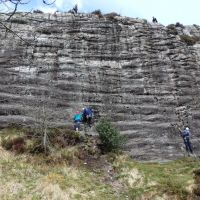 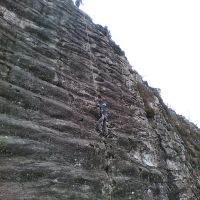 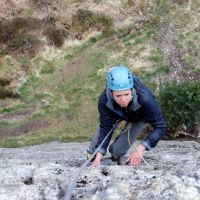