JG and SG arrived a day early at Ty Powdwr to get a day's rock climbing done before the main business of the Meet. In the event the weather turned this into a half day as it was wet on Friday morning so a few hours were whiled away in Llanberis, then in the Nant Gwynant looking for the new Lancs MC hut just N of Beddgelert, then to see the ospreys and over to Eric's Cafe at Tremadog. After that they did go to Clogwyn yr Oen in the Moelwyns and did finally do some climbing!

While at Ty Powdwr the previous evening a search in the old log books turned up an entry for 24 Sep 1988 which was the first completion of the Snowdon Fig. 8 walk , all of 27 years ago!

Surprisingly everybody rose really early on Saturday to get over to Rhyd-ddu for the 0900 start time, and after the shock of shelling out the £5 all-day parking fee pulled on waterproofs to fend off drizzle and fled the midges in the direction of Bwlch Cwm Llan. This col was reached quickly, or at least seemingly quickly as there was non-stop conversation to distract from the distance.

Onwards then up the S Ridge towards Bwlch Main and Yr Wyddfa, pausing only for more waterproofs as steady rain decided to support the Meet, so it was a dripping crew which trooped into the summit cafe, to join the throng already in there with the floor awash. Some expensive cups of tea were ransomed from the counter but soon after we left. Two intrepid members, James B and Mark, opted to slither over the ridge via Crib Goch while the rest waded down the Pyg Track against the flow of sponsored walkers and runners who were coming up it in droves. We dropped down to Llyn Llydaw and declared a leisurely lunch stop, which was nice as the sun came out, the rain stopped and there was a drying breeze. An hour soon slipped by, allowing time for some stovework to refill afew flasks with fresh-brewed tea, and then we uppped sticks for the second half fixture - to go up over Lliwedd and up again to Yr Wyddfa.

There was some wildly inaccurate estimates for the time this might take but in the end everybody got there, although there was some delay in getting Lester re-united into the group as he had flagged rather badly and even made a contouring detour which caused a delay for the patient waiters on the top of Lliwedd. The greyhound contingent sped off up  and the remainder followed on eventually in an elastic sort of progress as some fitness improvements left without attention slowed the main culprit. Fortunately he had noble companions who kept him company. The summit cafe was closed by the time the final man reached it so there was a long descent over the top of Cloggy and then a wearying meander across the moor with its maze of old quarry tips to get back to the carpark in Rhyd-ddu. Fortunately for Lester, the meet leader had also shepherded the party in and as he was the sole remaining car owner/driver was able to ferry everyone back to Ty Powdwr for a later than expected finish.

Young James claimed he was going into Llanberis for fish and chips, but got waylaid into some sort of rave going on at The Heights, and rolled back in the early hours of Sunday after everyone else had gone to bed.

The next morning was usefully and interestingly spent on a training session covering glacier ropework and crevasse rescue techniques. This was held on the dangerous short grass area outside the hut lounge windows which was ideal as it was easy to send the Outdoor Meets Sec. inside to make pots of tea to warm up and resuscitate those who had been crevasse-fall victims. Everybody learned something which would be useful and it was valuable practice.

After that people drifted off here and there as to personal choice. It had been a very enjoyable weekend for the most part, and the attenders had all done well to complete the Figure of 8, so well done to all. Lots of laughs, and lots of good conversation.

27 years? Something tells me that I won't be having another go at the walk in 2042 - there's bound to be something that makes that difficult if not impossible!

A special weekend's activity for the weekend of the longest day, based at our own Ty Powdwr, so plenty of room for a good turn-out.

Saturday - the main event:
Snowdon Figure of 8 is a tough combination of walk and scramble which is basically a double Snowdon Horseshoe, back to back, involving two ascents and two descents of Snowdon in one outing. It is perfect as a training/fitness day for anyone intending to go out to the Alps this summer, but if it proves to be a bit too tough for some it can be abbreviated at several points for a slightly shorter day. (If it's not tough enough for you you could carry a sack with an alpine-type load, or you could try it as a run - best of luck with that!)

Grid Ref :SH572526 on the dot of 09:00. This is an approx.30 mins drive from Ty Powdwr via Waunfawr so early breakfast needed. Carpark, pay &display, fills up quickly with train users so early arrival advised. There is some other parking near Rhyd-Ddu  but it is not so easy to find.

The route for the walk starts along the Rhyd-Ddu Path, a wide track, continuing E right to Bwlch Cwm Llan (alt. -take branch going up to Llechog) then turn N to climb complete S ridge of Snowdon on narrow crests to the summit of Yr Wyddfa. Then quickly away from the crowds, going N then E to travers Crib-y-Ddisgl, Bwlch Coch and Crib Goch directly over the Pinnacles. Good alpine-type practice. Then careful descent needed to reach Bwlch y Moch and the Pyg Track at Grid Ref: SH634553.

From the bwlch, find a (relatively) steep way down S to the shore of Llyn Llydaw and cross the causeway. Probably time for a stop at this point. (You should carry sufficient liquid to avoid dehydration for this walk - but you can refill from the llyn if you trust the water supply! You might also consider carrying a mini bivouac type stove and pot for brewing up - more alpine training!).

Now the route takes the (standard) Snowdon Horseshoe track up and over Lliwedd, down to Bwlch y Ciliau and on via Bwlch Saethau, before the long slog back up to Snowdon summit. This is on rather moraine-like stony ground and you will be glad when you reach the top once more. Now you just have to get down (like in the Alps!).

To complete the Figure of 8 the route leaves the Snowdon Railway to head NW down the ridge of Clogwyn Du'r Arddu on the Snowdon Ranger path, to Bwlch Cwm Brwynog at Grid Ref: SH590557. Here, overlooking Llyn Ffynnon-y-gwas, leave the main path and descend to the NW end of the llyn then head SW to pick up an old track leading through Cwm Treweunydd keeping W of the old slate quarries. At Grid Ref: SH576543 intersect a public right of way - not necessarily visible on the ground - which winds its way round and through the quarry tips generally S then SW all the way to Rhyd-Ddu with one careful crossing of the Welsh Highland Railway line.

The village pub should be open - you'll be glad if it is. (If it isn't - you will need a lot more training before heading for the Alps!). After a suitable interlude it will be time to drift back to Ty Powdwr for a well-earned evening of R & R.

You can work out for yourselves the distance for this route, plus the amount of height gain and loss - but don't be put off. Set yourself this target and get ready for it - give it a good go. (The route has figured as a KMC meet once before and quite a lot of people completed it -although we haven't seen some of them for a while!).

This can be done at Ty Powdwr , but it may be possible to go out to a suitable outcrop or small crag for actual practice in prusik technique and the like. If you may be going out to the Alps this year this could be a useful way to become more informed and practiced in skills which can keep you alive to enjoy it.

(In real life, you'd probably have to pay for this type of tuition - but the meet leader would be happy to do it for a (whipround) bottle of decent whisky).

*** Kit needed for this will be harness, rope, several karabiners, slings,prusik loops - and helmet if we go to a crag.

This could be a great way to spend a fine midsummer weekend - and even better if you can extend it for a day or so on either side.Get it into your diaries now. 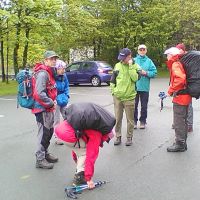 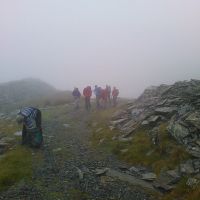 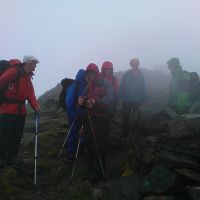 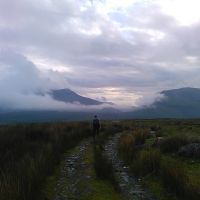