Calling by just to get the tick:  Christine Beeston, Neil Boynton,.

The weatherman was kind to us – just warm enough in the morning, sunny but not roasting in the afternoon, and a gentle breeze to suppress the midges…

Early entertainment was provided by Roger finding the initial 4a move on Trafalgar Crack amazingly difficult, then his second finding it even more difficult as it was her first route for 3 years.  This inspired Ben to launch up the same route, seconded by Dave Wylie.

Then the serious folk got going:  Camperdown Crawl  and Barnacle Bulge, both HS 4c, saw much struggle and many ascents.

Back with the easy stuff, Roger & Midge took Andy Johnson up The Promenade, a diff with an alternative finish at 4a which needed tight rope.

Dave W led "The Bunk Ladder" HVD, 4a with new faces Andy J and Gareth Collum then took his team over to Kismet Buttress where he led "Gun Cotton Groove" HD, 3c.    Then  “After initially trying to put up a new route, I double checked the guidebook, moved 8 feet right, and led the line I'd actually intended: "Powder Keg" HVD 4a.”

Joe Flynn and Cathy Gordon arrived and injected renewed vigour into operations on the harder routes, while back at KMC base-camp Dave W led "Defiance Crack" VD 4a, a route only known to those with the definitive guidebook.  Must be quite unpolished.

Dave Shotton and Duncan Zerafa didn’t arrive till after lunch but still fitted in a lot of climbing.  Dave led Topsail VS 4c for the second time this year, as well as Trafalgar Crack VD 4a.  Duncan led Captain's Prerogative HS 4b and Trafalgar Wall S 4b, with several folk (Roger, Ding, Joe Flynn etc) following up various of the routes on that wall.

As usual on Birchen Meets, Roger failed to get very far up The Gangplank without using his hands.

Emily P took a large contingent off to the Emma area, which must have provided plenty of entertainment because they weren’t seen again till the end of the afternoon.

Trafalgar Wall having proved so popular, Roger rigged a toprope on it and just about everyone who was still around ‘base camp’ tested their skill on it without testing their nerves.

Dave W finished of his afternoon in style by leading "Powder Monkey Parade" S 4b, and his many years experience showed when Andy J struggled a bit to second it – the ropes were rigged to give Andy really good protection all the way, including on the tricky start to the traverse.

At this point most of us left and headed for the Robin Hood, only to find it had closed at 6.  But at least we met Emily’s dynamic film-maker friends including Sandro Gromen-Hayes and Zoe Muffett, who just happened to be there.

Meanwhile, back at the crag, the Shotton-Zerafa team were making up for their late start, perhaps inspired by Emily’s text telling them the pub was shut:

“Duncan led Powder Monkey Parade S 4b - some old-fashioned combined tactics were required for the awkward polished chimney at the start (I gave Duncan a knee-up, then I used a couple of foot loops as aid when following up!), but Duncan had no problems after that and made a good job of the twin-rope management on the traverse and upper slab.

We finished off with a somewhat hybrid short route on Stoker's Wall - I led a line of least resistance at about VD/S incorporating at least some of Stoked I think, then Duncan followed me up keeping more to the line of the more delicate Stoker's Hole HS 4a.

By this time it was very nearly 8pm and we were the last at the crag.”

All in all. a good day out for the crag-rats.

Climbing, walking, running, bouldering, sheltering from the rain, eating, sleeping, getting fried by the sun… it’s all here.

Ten minutes easy walk from the car park at SK281723.  Get there early to park easily.  Parking seems to be expected in the field opposite the Pay and Display car park – but not in the pub yard unless you’re a customer.

This is a sunny airy crag that dries fast if there has been a shower overnight – and offers a great choice of routes.

And there’s the pub for a coffee afterwards!

Bouldering from V0 4a (even I can do that) upwards.

Meet 10.30 onward below Trafalgar Wall, where we met for the Newcomers’ Meet in May.

Right there is an excellent VD, a Severe, two HS’s and a VS for a start.

To the right from Trafalgar…..   Yo-Ho Crack is 20 ft of pleasant well-protected VD.   And it’s surrounded by other VD’s and Severes.

Further right is Copenhagen Wall with its 5a, 5b routes, then the well-protected Fo’c’sle Crack, S 4b:  I need to cheat a bit to get up this these days.

Further right still the excellent Horatio’s Horror HS and Nelson’s Nemesis VS 4b.

Left from Trafalgar, the classic Topsail VS 4c – my reach and a tight toprope help with this.

Just a little further left, the beautiful Sail Buttress, HS 4b:  the 4b is for getting started!

Then it’s one minute’s walk left to Emma’s Slab with its excellent collection of 40ft Severes and VS’s, including my personal favourite Emma’s Dilemma S 4a with its interesting start and even more interesting finish, both well-protected.  It always surprises me when I lead the finish – and I haven’t fallen off it yet.

Far left is the Moderate slab, The Gangplank.  I haven’t yet managed to do it ‘no hands’… 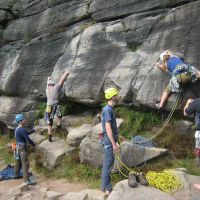 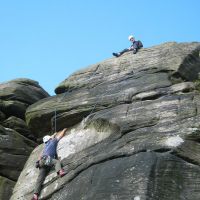 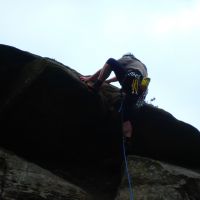 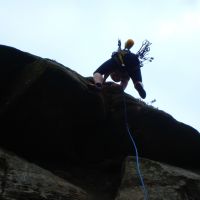 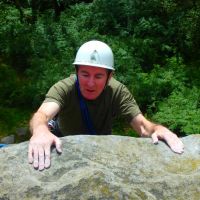 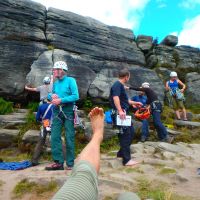 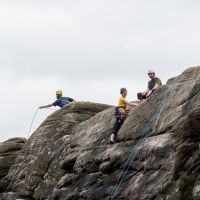 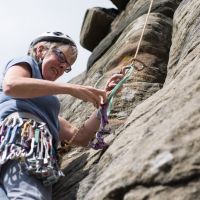 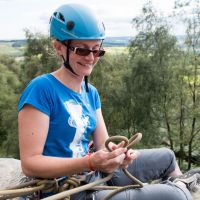 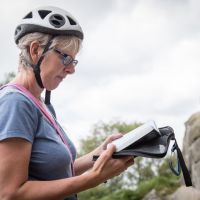