The forecast was spot on: it was a fine, still, sunny summer evening up at the Pits with twenty one members and guests attending. However, those familiar with the Pits knew that the stillness meant that the wee beasties would put eventually put in an appearance.

Beth opened her account with Foile Bergeres (HS 4b) followed by Dave Wylie and Elliot. A later attempt by George was foiled by the tricky start but Duncan eventually overcame with the loan of a no. 5 friend from Andy. Ryan, George and Dave S all followed.

A little further right Andy jammed his way up the overhanging start of the delightfully named Dead Dog Crack VS 4c. When Dan O’Brien followed he gave the start 5a. Duncan obligingly confirmed it was stiff for a 4c when he fell off twice, eventually untying muttering about jamming…..Dave S made a fine effort on second followed speedily by an on-form Beth.

Gareth had a direct line on Spanner wall in his sights: The connection gets E3 6a in Over the Moors and E4 6b on UKC – either way, your president can confirm it is rather tricky, having failed to get even a metre off the ground as G-mans’ second. Gareth had made a great effort on it, having a short rest on the three rusty pegs before threading the eponymous spanner and high-tailing to the top. ‘’Pumpy’’ was how he described it. With a bit of rope shuffling, Beth then used the line to make an ascent as a second on Spanner Wall (E2 5b)

Elliot and Dave broke ranks and wandered round to the lesser used no. 5 (Weavers) Quarry making an ascent of the excellent HS 4b called Weavers Crack

Meanwhile, Clay was having a fine time on the immaculate three star VS 4c – Plumb Line – the best line at the Pits – Fiona and Dave followed. Patti, Hannah and James were next, all clearly enjoying the superb climbing. James Meakin set up a belay at the top of Hazy Groove and The Cracks. Lots of folk climbed these including Emily, Geri, Guido and John, who also managed a cheeky solo of Unctuous. Beth finished her busy evening with Midsummer (S) followed by Emily and Geri.

By 8pm the midges were just too much so most folk packed up, about fourteen made it to The Church where we gave thanks for the evening by imbibing golden nectar. Voting included Shining Clough, Millstone Rocks (longdendale) and Helsby but the clear winner was Castle Naze. 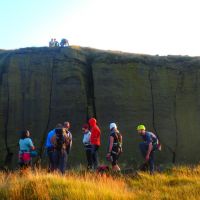 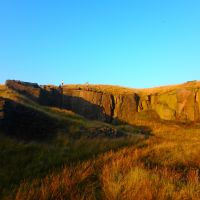