There was more quarried gritstone on the menu for this week’s Wednesday night antics.  Even a gloomy forecast from yr.no didn’t reduce our optimism.  Even sporadic showers throughout the afternoon could not dampen our enthusiasm.  Even biting winds on the walk from the office to the car-park could not put us off.  Even the driving rain on the motorway around Worsley could not…  Ok... we probably should have got the message by this point but undeterred we arrived at Wilton One car-park with a dry road and cloudy but dry weather.  The sodden path revealed that the rain had got there before us but with a brisk wind and a sunny aspect the inside face of The Prow had already dried out and we set about the evenings adventures.

Louis and Oscar left the sanctuary of the Prow to go in search of 999 (HS) but found it dripping wet.  They returned to attempt Dawn (HVS), a steep little number that has spurned many suitors over the years (including your correspondent!)  Andy opened his account by leading Eliminate (VS) with its steep starting corner and bold traverse.  Oscar found the initial section of Dawn to be a tough proposition without jamming, which he shunned as a matter of principle.  After a few attempts and with frozen fingers he decided to retreat.  Andy successfully navigated the crux of Eliminate despite kicking out the better of the two marginal micro-cam placements he used as protection.  As Dan tied on to follow the weather took a turn for the worse and by the time he was climbing the initial corner the temperature had dropped and the hail was pounding down.  Within seconds the rock was completely soaked and only some knee assisted grovelling allowed access to the rest ledge.  The hail, unrelenting, had now covered every flat surface and the crux traverse was dripping wet.  After a brief discussion and the removal of the last of the gear it was agreed that the best approach was to pendulum across thew face rather than attempt the moves.  The successful swing allowed access to the easy ground at the end of the traverse and quickly the top.  Unfortunately, the thick coating of hailstones had made the walk along the narrow top of the prow more worrying than usual so, frozen and drenched, Dan and Andy elected to abseil.

Back in the pub, after a Clark Kent style outfit change in the gents, the team warmed up over a drink and attempted to dry out soggy kit.  The vote for next week was biased mainly by a desire to save some of the better crags for later in the season.  Windgather was rejected due to Castle Naze being the crag for Sunday’s Hot-Pot climb and Alderman was rejected because Andy wanted to save it for the summer.  Anglezarke was rejected based on how cold and wet the voters still were.  The winner was Bridestones (near Todmorden).  The walk in is short, the aspect sunny and the pub nearby – what’s not to like?  Oh, by the way, it’s a bouldering venue.

See you all next week. 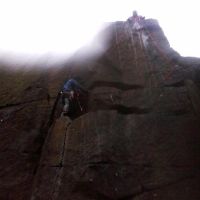