At the BRMC Hut Tremadog

Was this the inaugural meeting of the Karabiner Motorcycling Club?

Tim and Gareth certainly spent more time on their formidable bikes than they did on rock.

The whole idea of going to Tremadog was to enjoy its special micro-climate, and get on sun-warmed rock early in the year while it was still damp and chilly elsewhere. In the event it was damp and chilly in Tremadog, and sunny at Stanage….

Despite the poor weather, everyone came, which is great.

Shows team commitment or some-such. So we filled the Hut.

On Friday afternoon the wood-burner in the Hut was very popular – as was Eric’s Café just 100m away.   Mid-afternoon arrivals were greeted by Roger dashing over from the café, mug of hot chocolate in hand.

The evening was enlivened by frequent blackouts, eventually traced to what became a permanent fault in the (new) wiring to the staircase and upper dorm, so it was headtorches all weekend on the stairs and upper dorm – leading to the only accident  of the trip, when Dave W fell victim to the low beam and very high top step.  He got away lightly, with a nasty scrape down his arm.

Saturday dawned damp and stayed that way, but the A Team of Gareth, Hamish, James H and Jared set of for Carreg Hylldrem – a roadside crag so overhanging much of it stays dry.   There were route-finding difficulties we will gloss over….

Alex had come prepared to get wet – he had his surf-board in the van, and set off to make a splash at Whistling Sands.

Meanwhile the Walking Team was having no such difficulties.  Dave W, Lucie, Joe, Tim and Dave S went up the lane leading from the A498 up towards Tan-yr-Allt, then cut up through Coed Tan-yr-Allt, past Craig Pant Ifan  Upper Tier, following the track past Pant Ifan hut and the farmhouse of  Hendre Hywel, then up the lane (which eventually leads past Llyn Du) but  cut up before the llyn onto the rocky ridge/escarpment (which seems to  be strangely nameless on the map) above Beudy Cefn/Llyn Du, then down  the ridge to the lane leading us down past the caravan park to Prenteg  village and back to Eric's.

It was all rather damp as you can see by the photos.

Saturday evening was also enlivened by blackouts – this time traced to the drying room wiring.  That excitement over, the team divided into those who enjoyed the warmth of the log fire, and those who went to the village for the inner warmth of whisky.

The following morning it was clear who had been where….

Sunday dawned damp but drying – then went damp again – then dried but was still cold.   A phone call to Anglesey established that the weather was even worse there.

After Roger and Bob had made a substantial start on clearing a blocked loo, Roger decided it was warm enough for climbing but too cold for belaying:  unfortunately there is no scrambling around Tremadog, so Roger set off with the two Dave’s and Lucie to explore Moel y Gest.

It was an interesting approach, taking in a new trunk road not on our maps, T E Lawrence (of Arabia)’s birthplace, a railway station, a rubbish tip and a cemetery.    At the point when it was about to take in vertical brambles, Lucie and Roger retired to Eric’s.    Baked potato with salad is well recommended, as are bacon panninis.    However, they did miss a good view – Dave S emailed:-

“Moel-y-Gest  was hard going for a small top! Very fine viewpoint with a trig point and remains of an Iron Age hillfort but very awkward route-finding with various 'sandbag' paths which turned out to lead to dead-ends. Dave and I reached the summit after wandering through the quarry and re-tracing our steps before we found the path upwards, and finally descended again via a different route after thrashing our way down a steep gorse-covered slope, and cutting through a caravan park.

It certainly seems to have given a few other folk problems, see

Dave Wylie said he has no intention of going up Moel-y-Gest again which I can understand - I mended a few rips (from the gorse) in my jacket and trousers after I got home! I might be tempted back, if only to find a better route up and down, but possibly also taking in an interesting-looking Neolithic burial chamber called Cist Cerrig on the SW side towards Black Rock Sands.”

Meanwhile, back at the Hut, Gareth and Tim couldn’t resist the lure of their bikes and a dry spell and set off for home.

Christine, Laura and Bob had Cader Idris in mind and braved the April showers to arrive on top as the clouds cleared….    then made it back down to catch the teashop still open.  That’s planning for you!

Joe and Hamish discovered it was dry at Llandudno and set off to the Great Orme where they did 5 sport routes near Parisellas Cave. No guide, but Green Flash 5c and four harder routes.   Great weather until the rain came at 5.

James M and Alex set off for Christmas Curry, but were deterred by damp rock.

The heroes of the day were Jared and James H.   As the road dried, they set off for the classic Scratch Arête, HVS 5a.   And were successful, finding bone dry rock that stayed dry for the 90 mins it took them to complete the route.  [Probably the hardest route anyone did at Tremadog all weekend – there were only half a dozen teams climbing the whole weekend.]    Then they knocked off Striptease VS 5a, finishing as the drizzle returned.   Good work guys!

Quick coffees, a final successful blast at the blocked loo, bait the mousetrap, turn the water off and we were away……

A full weekend of climbing without using the car…..

The Bromsgrove & Redditch MC’s Hut is directly below Bwlch-y-Moch, and 5 mins walk from Pant Ifan - and most important, is just across the road from Eric’s Café.

We have the whole hut for the weekend, and it’s £12/night.

Cheque or cash to R Dyke or electronic transfer to KMC account (see website for details), in advance is the only way to be guaranteed a place.

About 1,000 routes in the Guide, VD and upward, most with good gear.

[To be honest, not that many at VD and S, but HS and upward – magnificent!]

The great thing about Tremadog, it’s at sea level and it’s a suntrap – we sunbathed there on 23 Dec 1972 – so we could have a warm dry weekend there even if it is wet & windy in Snowdonia. 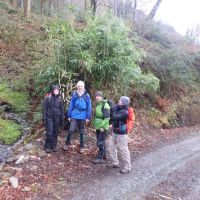 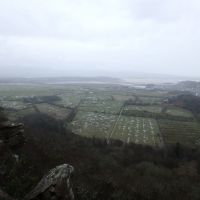 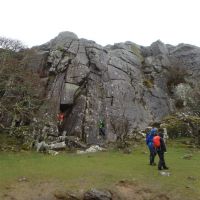 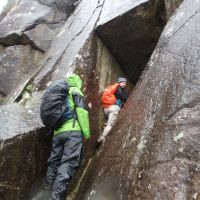 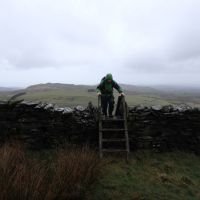 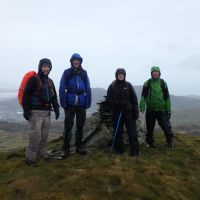 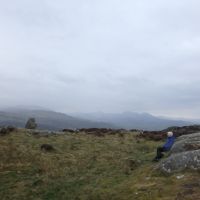 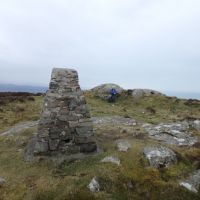 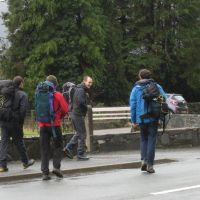