In a marked change from last weeks meteorological weirdness the KMC arrived at the crag in the forecast glorious sunshine.  Always  a popular choice, Windgather, with its short walk-in, sunny aspect and friendly angle did not disappoint.  This entire report could probably be summarised as “the KMC climbed pretty much everything at the crag, a number of times…”

James spent the evening working his way down the grades via Wall Climb (VD), High Buttress Arête (VD) and Chockstone Chimney (D), followed by Mark G who also led Mississippi Crack (S), North Buttress Arête Direct (HVD), Cheek (VS) and Aged Crack (S) - between them a very productive evening!  Dave took the opposite approach and worked his way up the grades via Toenail (VD), Nose Direct (HVD) and Mississippi Crack, followed by Mark A, Gowry and Anna.  Mark A also led Green Crack (S).  Ben, Clay and Rob teamed up and climbed Nose Direct, Route 1.5 (HVS) and Struggle (VS) amongst others.  On this occasion, Struggle was climbed without getting any ropes stuck by using a tactical wire-placement.

Will managed an impressive solo, on-sight, of the only E1 at the crag South Buttress Arête.  Dan wussed out on the crux though not before committing one move too far and ending his attempt with a brief unceremonious dangle.  Will also led Portfolio (HVS) followed by Dan.  Portfolio also saw ascents from Oscar and Joe who cruised it after beating a tactical retreat from South Buttress Arête and James H followed by Gary who reckoned that the steep and fingery final move felt trickier this time!

"I first did it [Portfolio] early in 1979, see the attached pitch of my dad showing us how to do it. In trainers with rope tied around his waist and waist belaying on a hawser laid rope circa 1959. I soloed the route in September 1980 they day before my brother got married, having cycled there on my own just to solo it and hadn't done it since until this meet. I soloed the cave arête direct route around the same time. I used to solo a lot back then, as the school friends that I started climbing with, had got jobs or gone to college and weren’t around to go climbing. Thankfully the KMC found me and I’m still around, as I do remember taking a couple of large ground falls from routes, and luckily walking away from them..." - Gary Thonrhill

Fiona led Footprint (VD) followed by John who led Nose Direct and Central Route (S).  They also have the accolade of being last on the crag, persevering with climbing after the rest of us had called it a day and headed to the pub!

There was some attrition between the crag and the pub however even with 11 of us in the there we still outnumbered the locals 11-1!  The nominees were Harpur Hill, Alderman and Pule Hill.  Witches Quarry was tactically left off the shortlist for later in the season.  Alderman fell at the first hurdle (the absence of the Chew-Valley Caucus this week clearly reflected in the ballots…) and it was left to the Pule and Harpur Hills to battle it out.  Harpur Hill was the clear winner so it looks like we are going sport climbing next week.  Pack your spare forearms! 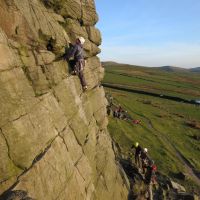 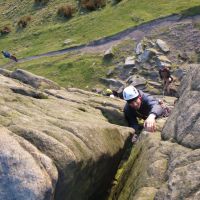 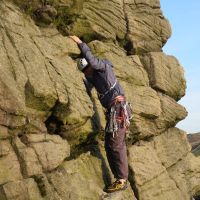 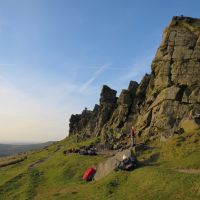 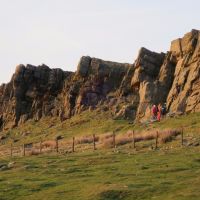 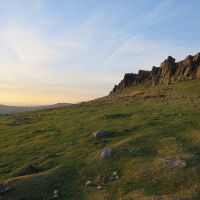 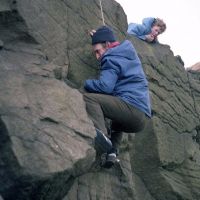 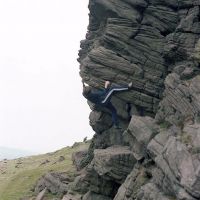