After travelling through horrendous wind, rain, sleet and snow on the summit of Dromochter we finally arrived at the bustling hut. An unexpected number of people had come along for the weekend despite of the dire weather forecast. (Only two KMC members and one guest though).

Although still blowing a Gale, the winds had dropped considerably from the bashing that the hut had received through the night, and with great optimism we set out toward Aviemore and Braeriach.

The going was good underfoot; icy in places with a smattering of snow, the visibility was very good despite the tops and summits remaining shrouded in clag.

John Corbett (guest) sprinted ahead putting me to shame while I plodded along behind him and Dave followed at a steady pace obviously taking great care not to aggravate his recently injured knee. The passage through Chalamain gap gave us brief shelter from the wind before giving us our first sight of the day's goal Braeriach. It also brought us out amidst a heard of Reindeer munching away on the heather.

We approached slowly expecting the heard to dart off at any moment but despite Dave and John getting within arms reach they did not bolt and allowed us to take several photographs before we continued on our way.

From the exit from the Chalamain gap we headed down into the valley bottom and further respite from the wind before fording the stream and heading up on to the shoulder of Braeriach itself. As we reached the cloud base we came over the shoulder and head first into the strong winds that blew directly into our faces. Head down, we struggled on into the wind which soon became blizzard, which in turn turned into a white out and blizzard, but nothing was going to stop John sprinting ahead and Dave as always took it in his stride.

The return journey was briefly greeted with clearing skies and a small glimpse of the surroundings before the clag came back down as night started to approach.

Navigation though not difficult did lead to some small difficulties as the weather condition forced us into altering from our preferred course leading us over a small ice/snow field. I decided rather than detouring back on to the track some three four hundred yards to my right to glissade down realising too late that the crisp icy layer I stood upon was only wafer thin as my axe cut neatly through it like a hot knife through butter. Fortunately I was able to obtain just enough friction to control my descent before reaching soft snow lower down, below the buffeting winds, where I gently rose to my feet and walked nonchalantly away as if that had been my intention all along, unfortunately there was no witnesses to my stylish recovery.

Dave and John followed by a similar route and agreed that at the end of the day the weather and conditioned had been far beyond any expectations we had for the weekend after the winds that had devastated the whole country only days before.

That evening we ate at the hut and chatted with the guys from the SMC who had been out ski touring for the day, and caught up on the day's gossip regarding the mysterious sleeping bag in the dormitory.

Apparently a sleeping bag had been left in one of the dormitories and no one knew who it belonged to as no record of anybody else staying at the hut had been entered into the hut register. So by a process of deduction, and close inspection of the sleeping bag and several other items left in the hut, including a wash bag containing mouth wash but no tooth brush or toothpaste, a shaver and razor, not to mention the dirty marks on the sleeping bag itself it was deduced that the missing occupant was a one toothed hirsute individual with bad breath and was know wanted by the police. In truth it turned out to be a SMC member who lived not too far away and had left his belongings behind and collected them through the day on Saturday. Of course this did not deter the other SMC members from making up their own mind as to the character who owned the bag or the fact that the police where still looking for him as he had been reported as missing.

A promising start to the day leads us of to Killin. The wind had dropped considerably and the sun came out as we drove south.

When we reached Killin, we started up the approach road to the visitors centre of Ben Lawers but were flagged down half way up to be informed that several cars higher up the road had come to a stop on ice and were blocking the road, so we did a U-turn on the road and parked up in the passing place.

By the time gear had been put on and sacks lifted on to shoulders the clag had once again come down and snow had started to fall, but that wasn't going to stop John and Dave from reaching the summit of Meall Corranaich & Meall a' Choire Leith, as they once again disappeared into the distance and out of my view.

In all it was a very successful weekend considering the desperate forecast predicted for the weekend. (Just goes to show you can never rely on weather forecasters and it is always worth the journey north of the border.)

Centrally situated in the Scottish Highlands this meet offers an ideal chance to make the most of the first snow, rain, wind, hail stone and lovely crisp clear sunny days in Scotland for the winter season.

We have 8 beds booked for this weekend at £7 per night, what a bargain. First to book will get priority.

I have never been to the hut myself but have been told it has all the usual facilities and is situated off the main A9 road past Dalwhinnie. (Go through village and take the A road towards Laggan - hut is on the right as the road drops downhill, Ed)

Close by are the Monadhliath Mountains, Creag Meagaidh and Aviemore and the Cairngorms are also within easy reach. So if you fancy a bit of winter walking, skiing, climbing, malt whisky tasting, book soon to avoid disappointment. 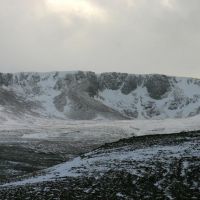 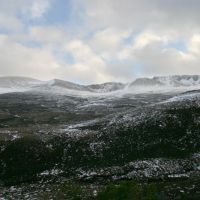 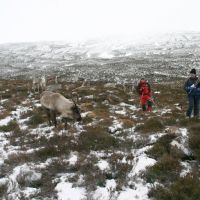 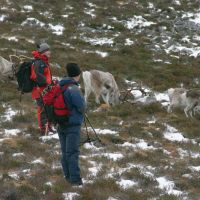