Despite some of the forecasts being less than perfect, the day turned out to be dry and very pleasant, if a little hot and humid at times. On arrival in Milldale, the consensus was for walking first with the possibility of a climb later, so seven of us set off for the walk which had been planned by Lucie. The eighth attendee, Colin, hadn’t arrived yet and was to join us later.

The walk of around 15km took us to the east of Dovedale, skirting Baley Hill to the east. We came upon a lime kiln before continuing south and descending into Thorpe village, passing an active shooting range with loud cracks of gunfire going off regularly. Turning back north, we paused at the southern end of Dovedale. Some of the party ascended Thorpe Cloud whilst others kept guard over the rucksacks at the bottom.

From here, we walked north along Dovedale, pausing at the Tissington Spires. Gregg, Izy, Ding and Kate continued along the dale back to the start of the walk, whilst others stayed for some climbing. Gareth led Silicon Wall (HS 4b), followed by Dave and Lucie. Just before the ropes were pulled, Colin turned up for a quick ascent of the route. A little higher up the scree brought us to Ten Craters of Wisdom (VS 4c) which Colin led and Gareth followed. A spectacular route up some very compact limestone with awesome pockets and threads.

It was now time to wander back to the cars (and bicycle!) for the journey home, which was longer for some than others. Colin had taken the train to Buxton, then cycled to Milldale – bonus points for the environmentally friendly transportation – but his wasn’t the longest journey. Greg and Izy had made a day-trip from London for the meet so that Izy could attend the required 4 meets within 6 months to apply for club membership. Impressive dedication!

Thank you to all who came along and made the meet a success. You can find an interactive map of the route we took at https://my.viewranger.com/track/details/MTExNjQxODc=.

From the BMC’s Peak Limestone South guide, “Dovedale is a supberb venue, with dramatic rock architecture in a beautiful setting. True, the dale can be a busy tourist trap at times – but the hustle and bustle is easily left behind by the brief uphill trek through the trees to the foot of the climbs.”

Dovedale is home to a small number of sport routes (mainly in the upper grades) but trad is really what it’s all about here. There’s not an awful lot below HS, but in the range HS to HVS there’s plenty to go at, including Silicon (HS 4b **), Ten Craters of Wisdom (VS 5a ***), Simeon Direct (HVS 5a **), John Peel (HVS 5a ***), Snakes Alive (VS 4c, Top 50). Once you’re into E1 and above, the possibilities really open up, with more classics than you could hope to climb in a day. And, in case of poor weather, there’s the aid routes at Dove Holes, including The Bat (A1 ***), guaranteed to provide good entertainment.

The routes are spread across a number of buttresses, spires, fins and arches, giving all sorts of possibilities to move around as the day progresses. Sandals can be useful if you want to wade across the river for a route on the other side, but a drier mode of crossing is never far away.

Dovedale can be accessed from either end, but we will be at the Milldale car park for 10am. From here, Gareth will be heading to the Silicon Wall area of the Tissington Spires, and moving on to different areas through the day as mood dictates – unless it’s raining, in which case it’ll be straight to Dove Holes.

Lucie will be leading a gentle walk of around 6 miles, with an option for those who may wish to extend it to around 11 miles. For those who wish to walk and climb, the walk length allows the option to go for a walk in the morning and then climb in the afternoon – but you’ll need to carry your gear. The walk includes walking up Thorpe Cloud.

There’s something to suit everyone, so come and join us for a day in this beautiful valley. 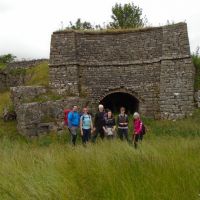 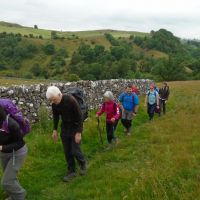 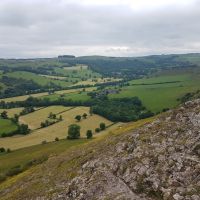 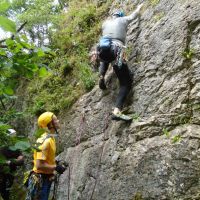