Attendees: Julia Partington, Oi Ding Koy, Al Metelko, Ann Waters, myself. The Craven Arms club decided against it in the end due to general lack of support by their club and the poor forecast.

A small but compact turn out.

Ding and Julia showed true enthusiasm and arrived first on the Friday night, which was a beautiful evening. They were very distinguishable by Ding's extra groovy pink camouflage tent which was openly and secretly admired by many including ourselves, and served as a potentially excellent landmark for those who said they were coming and didn't arrive. Shame on you, all of you...

Ho hum, well it rained cats and dogs on the Saturday when Al and I arrived. Ding and Julia had gone walkabout on the Wye Valley via the magnificent ruin of Tintern Abbey, the true and authentic tour of this was made rounded off with a farmshop style tea shop... Al and I went to look for Shorn Cliff (a crag I might add, not a person), how green those woods were and lush (gert lush), so green we managed to almost miss it, but for the tell- tale signposts leading one to them, route A, B etc, obviously for numpties - and we scaled the Devil's Pulpit for a great view of the aforesaid abbey. Ann arrived in one piece after a call from Waterstones in Brum re: which map to buy, and a new pair of spectacles which obviously did the job as it was not an easy place to navigate to...

The evening saw lots of things being set fire to... lanterns, countless proper bonfires, so we joined in! We barbequed in somewhat windy conditions... this was taken to the extreme de la extreme by Julia who beamed herself to the toilet block, taking Ding with her, up leaving a ring of burning fire behind her. We stamped that out pretty quickly, can't have that sort of alien activity in the KMC... This was later patched up with gaffa tape by Julia herself with great success in true KMC style...

Meanwhile Ding was making everyone nervous, I was on the edge of my sleep roll as she huddled over her stove, protected by a bag which said "Happy Christmas" on the outside... but it proved to be very efficient, and she produced fine looking noodles and other interesting food. A very nice evening... Meanwhile the party had started in the main barn. I thought I was hallucinating when I saw a giant pink haystack and a luminous green tree, lots of stage acts and a kids disco in the smaller barn, a very lively and relaxed place. I found it hard to believe I wasn't at a festival... It all ended with lanterns being set off into the sky, drunken bodies rolling into tents with much swearing from the squashed victims (!) and a piano, then a guitar being played into the small hours which was fairly out of tune... the earplugs I took, which resembled boiled sweets to stick in my ears, didn't work too well.

Anyway, onto the climbing... the next day was Sunday and saw lovely sunshine, and a very pleasant amble was taken by all on the Lancaut walk, around the impressive bend on the river Wye, and a mass ascent on Wintour's Leap of Central Rib Route 1 (severe). A really nice climb, with a very interesting down climb, which took us some time, but I think it was enjoyed by all four of us. Ann went walkabout due to second frozen shoulder, and a desire to get fully to grips with her book on a rock. We all congregated afterwards in the sun on the gravestones before the ruin of the 12th century church of St James, overlooking our crag of the day, eating lemon drizzle cake and supping tea. Ann made her own brew gathered from the bush of elderflower direct, and brewed up, very interesting too, and she survived to live another day with no ill effects, amazingly!

We returned to the campsite for shared food. Ann cooked up pasta under cover, earning the name "the talking tent"! There was much chatting and generally putting the world to rights. The campsite was strangely and amazingly quiet...but there did seem to be a lot of snoring that night.

Monday saw another fine dry day and a relaxed start; Ding and Julia (after an amazing and impressive yoga demo by Ding in which Ann received tuition (aimed at curing her frozen shoulder), headed off for another walk on the Offa's Dyke path followed swiftly by a pub in St Briavel's. Ann accompanied Al and I to Shorn Cliff then headed back to Brum, leaving us to complete some nice routes (loose at the top in places - wear helmet if you go there) on Abbey buttress; Acoustic (VD), Hydraulic Jump (VS 4C) (a very interesting climb lead by Al), admiration of Berlin wall, and then onto Tiger Bay; Wolf Whistle (severe), the top of where I subjected myself to a bit of serious tree hugging, which could be a continued hobby, and raised no wolf whistles... Hmmm.... and The laughing Cavaliers (HVS 5a (lead by Al)). All very entertaining, and an excellent day, but time was up as seems to happen when you're climbing! We were all planning on a pub meal, so we scooted el rapido back to the campsite and the remaining four musketeers screeched round the country lanes trying to find a watering hole to serve us before 9pm! After about four or five enquiries we were suitably accommodated at Tintern, in a pub with a big cider press and a surly but willing landlord who was happy to serve us food, and again a very pleasant and satisfying evening was had by all. On the way back we noticed that the sign to Miss Gracie's lane had been removed, all very mysterious and adding to “directionul confusiun” (Brizzul accent)...

The weather turned to torrential rain the next day, Julia and Ding decided to head back. Al and I waited it out... I didn't actually want to go home... and walked to Tintern via a disused railway path and coffee and cake, back through the well-trodden forest path, and then also left.

A lovely weekend all in all, and I think everyone seemed to enjoy it despite varied weather. I certainly did, and I plan to visit again at some point. Thanks to all who made the effort to come.

The Wye Valley is a lovely, very popular area situated between Chepstow and Monmouth where the river Wye carves through carboniferous limestone to create a fabulous, non-glaciated river gorge. It is mostly an SSSI area with rare plants and some rare trees, and a fair amount of bird life as I recall it from the walks I have done there in past years.

I plan to visit the Lower Wye Valley on this trip. The easiest campsite is at Beeches Farm, Miss Grace's lane, Tintern (north of Tintern abbey), OS ref SO548006, tel (01291) 689257 [Access from the S via a long track from Miss Grace's Lane, from the Woodcroft - St Briavels Road, Ed.]. Close to Shorn Cliff climbing area, but no pub close by, so bring some booze and some BBQable food. However, there are a couple of pubs, one at Woodcroft and the other further north at St Briavel's, serving food. Dogs are allowed on the campsite. There is a shower available, with limited hot water at 20p a go, barbecues are allowed (I plan to take a small one), and it's £5 per person per night. I am planning to be there on Friday 28th night. I have reserved 8 spaces so far.

There is climbing in several areas, both single and multi-pitch, and of course walking sections of the Offa's Dyke path would be a nice option. On the climbing front, the rock type is limestone, and trad gear is required. The nearest, and the most personally recommended climbing I have received, is at Shorn cliff, which is north west facing, sheltered, and just a 25 min walk from the campsite. Routes requiring trad gear (some pegs in situ, not to be relied on for condition), varying length from 10-30 metres. Grades VS to E2, but there are some at HS and a couple of Vdiffs [Try the Laughing Cavaliers (***) area, Ed]. The other area nearby is Wintour's Leap, two miles north of Chepstow, which has multi-pitch routes, grades ranging from Diff to E5, a very extensive crag, routes average at about 45 metres but can be as long as 90 to over 100m. Trad gear. Wyndcliffe (south facing so sun drenched...[when clear of the trees, Ed.]), 10 min walk in from the road, and offers routes ranging from severe to E4, some sport climbing also [Ban y gor has more of this and there are small crags in the forest, Ed.]. There is climbing at Symond's Yat, further north, but I have yet to look at the guide on this. I have been advised that the climbing is of poorer quality. 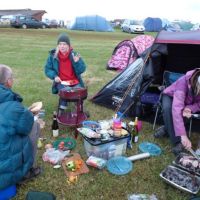 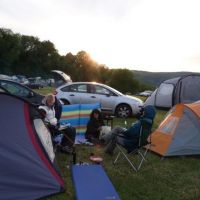 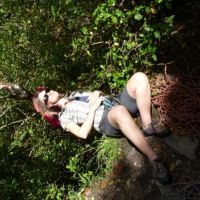 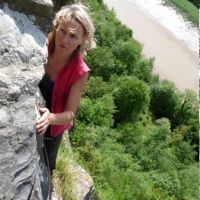 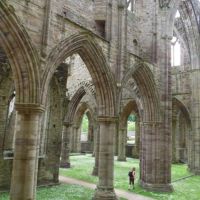 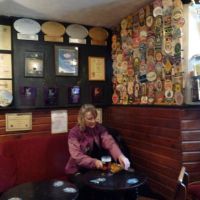 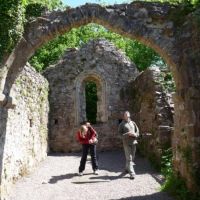 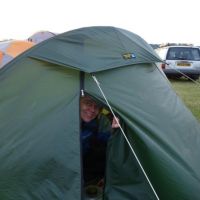 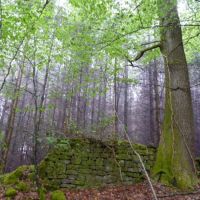 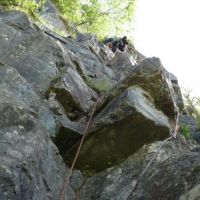 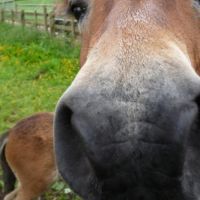